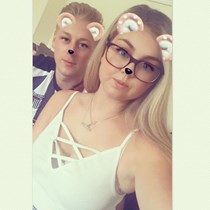 This is Mandy's story about her journey through Alzheimer's, from her late teens she had to watch her mum battle Alzheimer's and sadly passed at the age of 46

Mandy is a loving family mother who devoted her life to working and looking after her 3 young children, Aaron, Ellis and Georgia. She liked to go out at the weekends with her best friends dawn, Anna and Shelly, getting her well known name of wilks, randy Mandy, mangey dog and blonde bimbo. from day to day little things started when Mandy forgetting simple things which started to concern her closest friends as Alzheimer's can be inherited, she then eventually got persuaded to get her tested for dementia and at the very young age unfortunately she was diagnosed with the early stages of Alzheimer's at just 38.

Mandy had the amazing opportunity to go to London for special trials, the first trial started January 2013 and they ended in July 2015. These trials were for a new drug for Alzheimer's and designed to slow down the cognitive deteriation of the disease by breaking the proteins that damaged the brain. The trials Mandy decided to take we're global and if successful it would be available to all. The trial had two different type of drugs, one was a real drug and one was a placebo but you never knew which one you had, Mandy had these drugs in a tablet for which made her wee turn blue. (She found this very funny) she went to London 20 times in total for check ups and MRI scans to track the progress of the trial. Once the first stage was over, Mandy started the second stage of the trials and unfortunately Mandy had severe side effects from this stage and had to stop the trial after 6 months. This was very upsetting to Mandy as she believed if successful this drug would of prolonged her life allowing her to have more precious time with her family and friends that she loved. Anna, Andy and Jason went to every appointment with Mandy and she had her family supporting her all the way through.

The three kids have dedicated their time to take care of their mum through the years, taking it in turns every night looking after their mum making sure her health and her safety came first. Her eldest son was only 16 when he started caring for her and the younger twins 13.

Alzheimer's affects 520,000 people in the uk, the loss of brain cells are caused by the build up of protein to form structures called plaques and tangles and eventually leading to death of the nerve cells and loss of brain tissue. The part of the brain targeted is called 'hippocampus'. Over time with the death of brain tissue this leads to more of the brain is damaged, leading to everyday tasks a struggle. Some of the early signs are forgetting where you put your keys, struggle to find the right word in the conversation, losing the way to go on an everyday journey. Memories from the past are often unaffected with the early stages of dementia. Then the daily tasks get harder over time and things become more difficult, they struggle to follow a conversation they've had many of times, judging how far a distance is, possibly falling up the stairs, forgetting the right day or time.

Later stages in Alzheimer's include a lot of memory loss, and being confused a large part of their day. People with the later stages of Alzheimer's often repeat themselves a lot as they've forgotten they've said anything, they tend to have a lot of restlessness and find themselves pacing a lot. Some of their behaviours change with the confusion and they become more aggressive which can be challenging towards their carers, and suggest to have more one to one care at this point. Many suffers from this disease are on medication to help thinning the blood flow to the brain stopping other complications including strokes. Eventually over time this person needs help with the easiest of tasks which include eating, going to the toilet and help walking as they come increasingly frail. The life expectancy varies with people affected and depending on their age when they first started to get the symptoms. On average from their first symptoms of the disease they live 8-10 years, cutting their life very short. There is more information in the link below about different types of dementia.

Mandy has forgotten simple things like eating, drinking and taking her tablets and through this disease has developed further complications, which include mini strokes and epilepsy. This has lead to her many of times in and out of hospital in a short period of time. This disease has aggressively got worse quicker than the family thought it would, now leading to her to be bed bound and without taking any fluids or solids. Mandy is now in full time one to one care at stallingbourgh, with her family and close friends visiting very regular. In the last couple of days the family have learnt that Mandy is now in the very later stages of her short life, carers have called this 'end of life'. Her heartbroken family have come together seeing her everyday to make sure she's comfortable and seeing her smile. But heartbreakingly Mandy doesn't have long to spend with her family and her three young children are having to save up for her funeral, with her first 2 grandchildren on the way as well, this is a very difficult time for her family and I hope reading this has made you realise how heartbreaking Alzheimer's is for families and how common the disease is just in the uk. I have set up a link below if anyone would kindly donate towards the funeral for Amanda Wilkins. Mandy is unable to thank her close friends and family for the help and support she's had on the way, she would be very grateful for what they have done for not just her but for her children as well. There is also a link to the Alzheimer's page if you would like to donate to the Alzheimer's society and one day help find a cure.