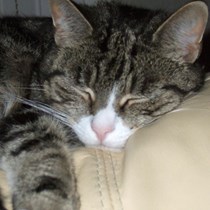 Weʼve raised £90 to Help us to rehome unwanted and abandoned cats in Renfrewshire.

Animals and pets
Funded on Thursday, 25th May 2017

Many of you will already know about the work we do to help reduce the vast number of stray cats in Renfrewshire. Our group consists of a few dedicated volunteers who work seven days per week throughout the year to rescue and rehome as many cats as possible. Though under the name of Johnstone Cat Rescue, we deal with situations in towns and villages all over the county. We have to accommodate these cats, feed them, provide necessary equipment such as litter trays, scratching posts, and get them whatever vet treatment they require, be it neutering, dematting, tending to war wounds, flea and worm treatment etc. Sometimes it's more serious than that. The two cats in the photo had a combined vet bill of £2000 caused by injury and neglect. This money was raised by the donating public, and without it these cats wouldn't have survived. We receive no funding from the government or any other agency, we rely totally on the goodwill of the public to keep us going. We are asking for your help again folks. Renfrewshire's street cats are sleeping under cars and bushes, and begging for food wherever they can. They deserve a loving home just like your cat or mine. Please donate to help them.