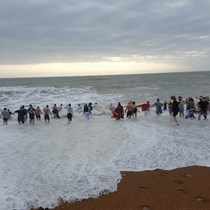 Weʼve raised £602 to to keep our Boxing Day tradition of 30 plus years going and to raise as many much needed funds we can for our local charity p.a.t.c.h !

HI all! Firstly id like to thank people in advance for any donations already made to this great charity and for any we may get this time around, thank you! I’m setting this page up as its easier for some to collect finds this way for the chosen charity, the readon im setting this up mainly is becsuse ive just heard that our local annual boxing day swim in ventnor on the isle of wight is to be stopped due to not being ablr to raise enough much needed funds amongst other reasons,this tradition has been going for over 30 years so its a huge part of our community now and also a huge boots to our local buisnesses! It brings our community out together to share this annual event where familes and friends come out in the thousands to spectate and raise much needed funds for our local charity p.a.t.c.h for which i would like to set this up for in the hope thst we can raise enough for this fantastic charity and continue to support them further and keep our tradition going for many more years to come! Thank you for reading and i do hope you can help us in any way possible thank you so much for your time! Below tells you all about the charity and who they are and what they do! Thanks for reading.

In 1989 two friends having a cup of tea in a Ventnor garden talked over the fact that their recent fundraising for a cancer group resulted in money raised in our area was being sent to a central pot and may not reach the people here who would need it.

People’s Approach To Cancer HelpDiane Landon and Erika Arnold decided that things should change. It was Diane’s remark that “there should be a cancer charity just for

local people” and Erika replying “well lets do it then” that lead to the start of PATCH,Peoples Approach To Cancer Help.

Our aim was and still is, to alleviate the financial strain caused by transport costs to and from cancer treatments. Very often the main breadwinner gives up working,if not through ill health then to become the carer. The strain can be tremendous. We felt that following a diagnosis of cancer the last thing you need worry about is the finances.

In those days patients had to pay for their prescriptions and the charges were a major expense, if one set of pills didn’t work then another lot were tried and so on. Nowadays prescriptions are free for cancer patients.

We started out with £14 in the kitty and started asking people to become a friend of PATCH for £2 per annum. Along with our husbands Den and Brian we did a huge amount of fundraising and advertised everywhere, it is only in the last few years that we have managed to take things a bit easier.

Our first patient was in March 1989 and we were able to give them £12.60 to come home from Nettley, where people receiving radio therapy in Southampton stayed,for the Easter holiday. We became a registered charitable trust in November 1989. In 2009 we were so pleased when Ros Barrow agreed to become a Trustee and remains to this day a very valued member of this small team of three after Diane and Brian retired in 2010.

Our proudest boast has always been that we continue to have no administration costs, so every £1 given will in it’s entirety go to someone you know, whether they are a relative, friend or aquaintance. We strongly feel that this has been one reason that PATCH has succeeded.

So many local groups and businesses support us now and we are overwhelmed by the generosity of everyone, for us though we feel so honoured that the local community think that our cause is worthy of all this kindness.

Due to this we are now able to give more realistic amounts of money for travel, the cost of travel has escalated and there is talk of assisted travel being stopped. If someone is travelling to the mainland daily for six weeks and has maybe lost their wages through ill health, they will be facing costs of around £1000. So this is where we come in. When you feel a bit low and full of worry, it does such a lot of good knowing that people care about you. When we receive thanks for the money we hand out we always say “Don’t thank us, it is the people of Ventnor that give it to us for you”

As we approach our 27th anniversary on the 16th February we have given out in exess of £48 thousand pounds, all given by wellwishers.

Our new website has been designed and built free for us by the The Isle of Wight Computer Geek in Freshwater.

We are very proud of PATCH, someone once said “it is amazing what two ladies can achieve over a cup of tea!”

We Say that PATCH IS A TRUE EXAMPLE OF A COMMUNITY HELPING ITSELF.

The usual organisers of patch have been going for years now and our annual Boxing Day swim is in its 37th year ! They have done so brilliantly I thought it was time they got to relax and let us help them raise much needed funds! Every single penny goes to the people !!