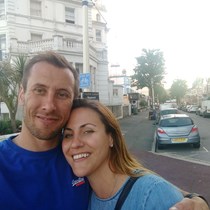 I am competing in my first and an Olympic Distance Triathlon on the 28th July in Seaford. I am raising money for the charity created by the family of my late friend Dom Jackson who sadly died at sea.

T he Triathlon seemed like a perfect choice for me as Dom himself was ultra fit and enjoyed adventure and a challenge. This has certainly challenged me with a 1m swim in the sea to kick things off. I have never taken part in anything other than recreational swimming and cycling before so this has been a massive stretch for me and one I know Dom would have taken up with me.

So at the back end of January I took to the pool swimming 80m before felt like my lungs were exploding. Then buying a secondhand road bike and not knowing how to change gear or to un-clip my shoes.

I am now training hard to get up to the level so I can complete this. Every time I feel tired or like I can't do this I just remember what my mate Dom must have gone through that day at sea and this spurs me on.

I am now training in the sea ever Monday evening, which I love, and I am beginning to understand the currents, waves and testing environment that the sea brings. This is has also help me to understand some of dangers the sea brings and how important it is to have a PLanB.

Dom Jackson tragically died alone at sea in freezing conditions after a kayaking accident in February 2017. This accident could have been completely preventable had Dom been wearing a Personal Locator Beacon (PLB). No one knew of Dom’s disappearance until 36 hours after he’d gone missing. His body was found days later, more than 50 miles adrift of the primary search area.

The search for Dom involved the Police, RNLI, and Coastguard, who utilised helicopters, lifeboats and light aircraft. It was supported by scores of volunteers including his family who scoured the cliff tops hoping for the merest glimpse of him.

The financial cost of this operation was enormous, and its emotional toll immeasurable.

Everyone who knew Dom would say he was a special person. A kind man, with a love of adventure, and a tangible zest for life. Now, we’re building Dom’s legacy, to raise awareness of accessible safety technology like PLBs so that others don’t share his fate.

I am competing in my first and an Olympic Distance Triathlon on the 28th July in Seaford. I am raising money for the charity created by the family of my late friend Dom Jackson who sadly died at sea. https://www.planbcharity.org