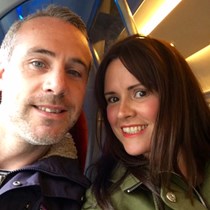 Weʼve raised £24,113 to help our inspirational friend, Martin Hibbert and his daughter Eve who suffered life changing injuries in the Manchester terror attack

Our friend Martin and his daughter Eve suffered horrific and life changing injuries in the recent Manchester Arena attack. They were 10 metres away from the bomb when it detonated. Martin suffered 22 shrapnel wounds from the nuts and bolts from the explosion, which basically entered his body from head to toe. One of the bolts entered through his neck, destroyed a main artery and then passed through his throat, at which point he swallowed it. He needed 16 pints of blood before he reached the intensive care unit and has had several long operations to remove the shrapnel and at first they didn’t think he was going to survive.

The bolt that caused the most damage lodged in his spine and has left him with a T10 spinal injury which means he is now paralysed from the waist down. He was in the trauma unit at Salford Royal until the end of June and was then in a spinal rehab centre in Southport where he was until the end of September.

Martin has been busy putting his story out there in the media with a series of moving and inspirational articles, such as this one published in The Times. You may also have seen him on the very moving ITV documentary 'Manchester: 100 Days After the Attack',

We are raising funds for Martin and Eve to help support the massive changes that will be needed to their lives going forward through a series of events:

The team from Helios Medical Communications will be taking part in Tough Mudder at Belvoir Castle, Grantham on Saturday 12 May 2018 and they have kindly agreed to donate all proceeds raised to Martin and Eve. We will be posting updates on training and appreciate any support you can provide leading up to the event.

A fantastic team of friends and family will be running the Manchester 10K on Sunday 20 May 2018. Those running are:

Martin himself will also be taking part in the race in his wheelchair which is an inspiring and amazing achievement 1 year on!!!

Please support this fabulous team of people to get us over that finish line.

Thanks to everyone who took part in our rave for Martin and Eve on Saturday 25 November, it was a fabulous night with lots more money raised. Special thanks go to the two venues (Blackdog and Roc and Rye), the event organisors (Andy Scott from High Five, Gemma Gore, Lewis Hurst), the DJs, those who donated raffle tickets and those who bought them, family and friends who helped sell the raffle tickets and everyone who came to the night.

The list of prize winners from the draw on Saturday 25 November is below:

8. Sunday roast for two at The Metropolitan, Didsbury – Chris Hill

10. Tour of Coronation Street to meet some of the cast – Wendy Monroe Salford Uni

13. Whisky tasting for 4 at The Whisky Shop, Manchester – Gary Hare

16. Free parking for 2 weeks at any UK airport – Kiera Ruddy

17. Two tickets to the Alfresco festival in May 2018, Kent – Joanne Rogers

19. Hospitality for 4 at any Man City home game this season (not including the derby) – Simon Wilson

Thanks to our amazing family, colleagues and friends for holding a series of cake sales and raffles that have raised a HUGE amount of money. Well done to all and thank you!!

Our friend, Jemma Williamson a.k.a. THE JEMINATOR took part in the Manchester 100 km bike ride on Sunday 3 September to raise funds for Martin and Eve. Thank you all for supporting her with amazing achievement!