Weʼve raised £5,937 to originally support Martin through his palliative chemotherapy. Sadly, now to help his family finance his funeral costs.

In 2016, Martin was diagnosed with Parotid cancer, a very rare form of cancer. Two tumors were found in his skull and were wrapped around five facial nerves. He underwent a fairly gruesome surgery and a stint of radiotherapy at the Queen Elizabeth hospital in Birmingham. He was given the all clear the following summer.

Two years later, in May of 2018, Martin collapsed whilst taking a short holiday to Spain with his fiance. An ambulance was called to their hotel room and the paramedic punctured his ribs to release the build up of fluid so that he could breathe. An X-ray in the Spanish A and E showed 3 massive tumors in his abdominal cavity 13x13x16cm. 6x6x5cm and 4x7x6cm and many more 1.5cm tumors inside his left lung. These tumors were missed on his head and neck scan in November, when he went for a follow up in January he was told the lump on his head was probably an infection and when he went to A and E for a suspected broken rib (from coughing) in February, he was told to take some paracetamol.

After discharging himself from hospital as his holiday insurance company were taking too long to process his application for an air ambulance, Martin flew home to Birmingham on a commercial flight and took his Spanish scans straight to the Queen Elizabeth A and E. A bank holiday weekend, he was kept in A and E for 4 days. Finally after being discharged with an appointment for a PET scan a week later, another week for the results which confirmed the presence of all of the tumors from the Spanish Xray and also that the lump he had pointed at above his ear in January was also a tumor. After another week to see an Oncologist, Martin was told his case was terminal. A nurse explained to him in the corridor, that the form he was given was for patients with less than 6 months to live.

Martin decided immediately, at the age of 28, that he would like to try and battle the tumors to give him as much time as possible to spend with his family and fiance. There are no trials available for this type of cancer and with no scientific basis, his oncologist can only prescribe the strongest type of chemotherapy that they have which "has had good success at slowing other general cancers". Martin also agreed to a painful biopsy of the tumor in his head, not for his own medical benefit, but for the 100,000 Genomes project which he hopes will help advance medical care and treatment of future patients.

Martin checked in for his first round of chemotherapy on Monday 2nd July only to be told that the cough he had had since January was preventing them from starting the course. Three days later he was sent home and told to continue taking antibiotics and return the following week. Finally, 8 weeks after collapsing in Spain, he has started his 21 week journey to try and slow down this incredibly aggressive cancer.

Martin only took 6 weeks off work for his first run in with cancer. In fact he took on additional jobs to try and keep his head above water. This time around, he is aware that he has no choice but to stop working completely. Not only must he try and keep his contact with others to a minimum to avoid germs while his body is weakened from the chemotherapy, but he must also take the time to spend any time that he is well with his family. His fiance also needs to cut back her work hours so that when required she can look after him at home.

In the mean time, Martin has many expenses he must pay for. The basics of a roof over his head, food for when he is feeling up to eating and other basic living expenses such as electricity and water. His SSP covers less than 50% of his rent. Macmillan will support things like jumping out of a plane, a holiday, or new clothing, but they can't pay his bills.

Martin also wishes to be repatriated to Latvia after his death for burial which will cost a couple of thousand pounds. He moved here at the age of 18 and whilst he insists he has forgotten more Latvian than he learnt of English, Latvia is home. While we have suggested a small target, any money that isn't spent in the next few months will be used to grant this wish. However, it is our deepest wish as his friends that this extra money is found as soon as possible so that he can spend what remains left of his life living, not worrying. 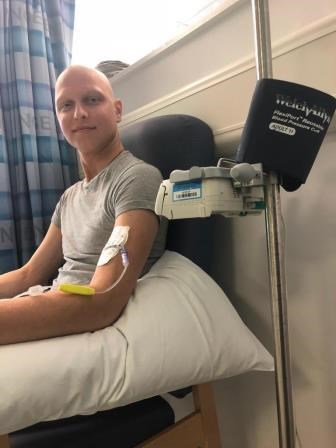 Thanks so much for your incredible support

Martin finished his chemotherapy at the beginning of November; feeling positive about the outcome and having managed the symptoms so well, he decided to plan a weekend to New York City in December for his birthday. With the fear that it would be his last holiday and birthday, he wanted to go back to the city he dreamed of as a child and the place he proposed to his fiance Hannah. They went together along with Martins brother Guntars, as they were afraid of a replay of the holiday in the summer and naturally Hannah wanted someone with her should the worst happen again. It all went well and they had the best time and made some amazing memories.

After New York Martin focused on enjoying the little things in life such as spending more time with friends and family and looking forward to Christmas and seeing in 2019.

At the end of January, he received a call from his Doctor informing him that he had been accepted for a trial drug called Lenvatinib from America – though typically it was used on patients who were suffering from kidney and liver cancer, it had been known to have shown great results on patients with metastasis cancer which is why Martin had been put forward for this treatment. He went for a immediate scan to use as a base line for the treatment and went home with the flashy new chemo tablets that same day.

Two months down the line we’re in April and Martin has had a follow up scan to see whether the "miracle" treatment had been working for him. Sadly just a few days ago on the 16th April he received news that he nor his fiancé wanted to hear; his treatment had not been working and his tumours had progressed. Martins doctors have been quick to prescribe him a new course of palliative treatment which consists of two types of chemotherapy – Paclitaxel and Carboplatin. The two together are known to treat ovarian, womb, cervical and lung cancer. He will be starting this course of chemotherapy at the end of April and although doctors are still uncertain whether this will help Martin slow the progression of the tumour growth, he has such a rare type of cancer there are no other steps to follow. His doctors are researching case files of extraordinary cancers to see if they can find similarities and see what treatment worked best for them.

Despite receiving the news his cancer has progressed and he has to undergo another course of treatment, Martin is adamant he will win the fight and won’t let his treatment interfere with his life and is still planning to marry his fiancé Hannah in July this year. He has said “we are going to plan chemotherapy around our lives not our lives around chemotherapy”

Martin has made many volunteer appearances "at the office" over the last few months when he has been less susceptible to infection. As many of you are aware, Martin is a very sociable guy and is incredibly bored being stuck at home. He has now been advised to keep contact with others back to a minimum again to help avoid any germs attacking his weakened immune system during this next phase.

We are all delighted that Martin has outlived his prognosis and are so impressed with his positivity. We are continuing our fundraising efforts to help aid with his everyday costs of living while he is unable to work. 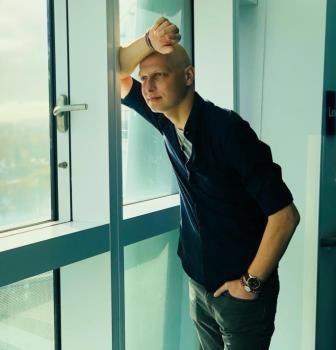 It is with a very heart that we have to update this page witih news of Martins passing.

On Thursday night, Martin passed away at the Severn Hospice in Shrewsbury.

This incredible guy beat his prognosis by nearly 7 months. He loved life and he just didn’t want to give up the fight.

Hannah and his family are currently finalising and following through with Martins last wishes of being buried in Latvia.

His additional months of life, while a blessing, also incurred extra expenses to cover rent and bills and so all donations will be gladly received.

Thank you to everyone who attended the church and came back to Fishmore Hall to help celebrate Martins life.

It is testament to the person that he was how many people attended and how many fabulous stories were shared.

Thanks to the support from friends, family, hotel guests and the kindness of strangers, Martin will be buried in Latvia on Saturday 13th July at 1pm.

Thank you all so very very much for all of your support and for making his final months easier.