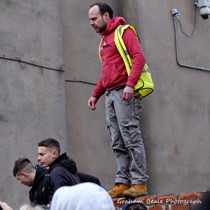 Martyn Kellegher-Burton, aged 38, suffered cardiac events while stewarding the 821st Atherstone Ball Game on Tuesday, February 25, 2020. He remains in a critical condition at Walsgrave Hospital, where he was transported via air ambulance after initial life-saving aid was provided by the emergency services on site in Long Street.

The episode is likely to be life-changing for Martyn, who has two children aged three and 12 weeks. This fund has been created to help support his wife and young children in their hour of need, with the support of the Atherstone Ball Game committee. Please give what you can to help them at this difficult time.

A modest target of £821 was originally set in recognition of the 821st Atherstone Ball Game Martyn was stewarding at. That was hit in two hours, much to the appreciation of Martyn's family. That early success has prompted the target to be increased to £1,821, and now to £5,000.

Fingers crossed with your support we can reach that revised target too.