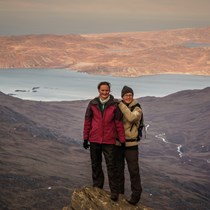 On August the 19th my husband Craig Asher was diagnosed with stomach cancer (stage 4). He has a large tumour in the stomach and the cancer has spread to other areas of his abdomen. The family was told that it was inoperable and when Craig asked how long he had, he was told the devastating news of one year. Craig's illness has brought a huge amount of fear and pain into our life. When we got the shocking news our first child Adam was only 5 weeks old.

Options in Scotland were limited. Chemotherapy gave the possibility of extending life by 3 months if it went well. With so much to fight for as a family we looked around for some other treatments. Immunology was the obvious answer. Immunological drugs super charge your immune system to fight cancer and is considered the most cutting edge cancer treatment in the world. People can live for years or even be cured. But it is very expensive.

In Scotland a trial was available. However it was a semi blind trial and there was a 33% chance of getting just chemo on the trial, in effect the placebo group.

Although immunology is still banned in the UK for treating all cancers except skin cancer, it is however legal in other countries. This was our only hope. After shopping around we found a private practice in Germany who offer both immunology and chemotherapy. If you take immunology abroad, the NHS is not allowed to offer you chemotherapy. So all Craig's treatment has to take place in Germany. Furthermore, Craig can't eat anymore and relies on food packs delivered to his body intervenously. Those are expensive, for each day we have to pay €93. NHS refused to provide us with those packs. It is likely that all costs for treatment in Germany will be in excess of €100 000.

I am determined to raise as much money as possible for my husband. We have to try for Craig's life, for our love and for our baby son Adam. Craig is a wonderful person and it's very sad to think that his own son will not grow up with such amazing daddy.