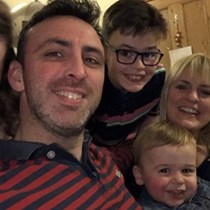 Weʼve raised £33,520 to Help Matt, Jo and their kids with treatment costs and respite from his ongoing fight with bile duct cancer (cholangiocarcinoma)

At the start of 2016 one of our oldest and dearest friends, Matt (top right in the picture) was diagnosed with cholangiocarcinoma (bile duct cancer) It is typically difficult to diagnose accurately and early, and often too advanced for surgery which is currently the only potential cure.

In February 2016 Matt underwent the surgery which was followed by a course of chemotherapy. By the end of the year he was recovering well and it seemed the expert doctors in UHW and Morriston Hospital had got there in time.

Unfortunately, we now know that the cancer has spread to his liver. Matt is currently undergoing chemotherapy at Velindre we will then see what other treatment options present themselves.

Throughout all of this Matt and his wife Jo have shown staggering bravery in the face of adversity, they have refused to lose their sense of humour and ensured the world of their Children; Noah, Martha and Jude (10, 6 & 2 years old) remains as normal as possible.

So we want to raise as much as we can for Matt and Jo to put towards the cost of any treatments which become available, to help Matt support the family, maybe take a holiday with the kids or pursue alternative treatments wherever they may present themselves.

If you are able to support us in reaching this goal I urge you to do so by donating and sharing this story. We thank you in advance from Matt, Jo, Noah, Martha, Jude and all their family & friends.

Keep in touch at https://www.facebook.com/friendsofmattburns/