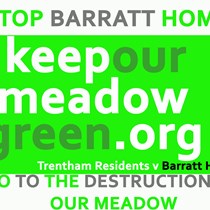 Since September of 2014, Barratt Homes have with various partners been attempting to build over 200 houses on the 17 hectare meadow at the end of Meadow Lane, Trentham Stoke on Trent.

The developers and their partners have used every trick in the book to try and force through the development, from underestimating distances from the Meadow to various essential amenities including misrepresenting traffic counts and congestion forecasts: denying the presence on the meadow of various protected species, and their habitat; creating false local nursery's, and blatantly lying about a local Headmaster welcoming the plans when he had no knowledge of it at all.

The Stoke on Trent Planning Committee saw what the application was about and threw it out in December of 2017, however the developers waited until the last day of the six months they had to appeal the decision to put their appeal into the Building Inspectorate.

The first part of the appeal was heard in February 2019, but because of time constraints was adjourned to reconvene on 21st May 2019. It is important that the local community group Keep Our Meadow Green have expert representation in the form of a Transport Planner who has the knowledge and experience to see through whatever further misrepresentation the developers or their agents may try and make.

Without it the plans could be given permission, and the lives of the local community will be blighted forever with intolerable traffic delays, unsafe road systems and layout with only one way in and out of an enlarged estate that will house almost 600 houses, dirt and pollution that a seven year build will bring, and importantly the loss of the last remaining meadow of its type in this part of the country and the effect that will have on the diverse and sometimes protected flora and fauna that live there.