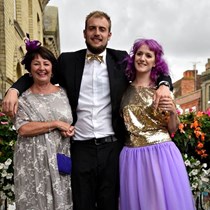 Weʼve raised £2,150 to get our Mum Regional Hyperthermia treatment for cancer. Olive 4 & Uma 3 and friends are doing a sponsored walk to raise money for their Nana

My two children Olive who is 4 and Uma who is 3 want to do a sponsored walk in fancy dress to raise money for their Nana. They have some friends that will be joining in too! All the children will be walking 1 mile finishing at the prom in Maldon for a picnic. Please sponsor these little legs

We wanted to tell you a bit about our Mum. She was born in Billericay Hospital as Maxine Wilson in 1957 and was raised in Wickford, where she attended infant and primary schools and finally Beauchamps High School between 1968 and 1972. She went on from there to work as a machinist making coats. This turned out to be a life long love of hers and she still sewing to this day. She went on to work in The Old Windmill in South Hanningfield for around 17 years. In 1979 Mum gave birth to our brother Stephen Samuels and her journey in to mother good began, in 1986 Lora came along and two years later so did I. Mum now has two Grandchildren (by myself) Olive 4 and Uma 3. Throughout her life Mum has faced various struggles but has always refused to let them beat her, this same fierce, unstoppable attitude is still driving her today

In April 2018 we had the heartbreaking news that our Mum had cancer. The journey has been like riding a rollercoaster. We were told it was not cancer originally, then we were told it was but hadn’t spread, we were told it was stage 3 ovarian cancer but eventually we found out it was stage 4 bowel cancer. My Mum lived in Spain up until April and was planning on moving back to spend more time with her Grandchildren. Whilst the move was underway she became too poorly to continue and ended up in hospital in Spain, this is where we found out that it was cancer. As you can imagine this was awful for us as we were so far away from her. My sister and I managed to get a flight over and arranged for her to get back home with us safely.

Once she was back here she spent a lot of time in and out of hopsital having various different tests. She was very poorly at this point and it was a scary time for all of us. She eventually started chemotherapy and immunotherapy in June. She has also been doing alternative treatments along side this. She has cut out meat, fish, dairy and eggs and eats as alkaline as possible. She takes various supplements which include vitamin C, turmeric, spirulina and also THC and CBD paste. These treatments cost a fair bit of money but are absolutely vital to her health. We have done and continue to do what we can between us all but my Mum is too poorly to work and is unable to claim benefits as she has lived outside of the country. Her and her other half have been living off of his sole wage which is mostly gone after their rent is paid.

We are setting up this page to help my Mum keep up with her alternative treatments as the hospital have said they are unable to operate on the nodules that are on her small bowel. They no longer intend to 'cure' her of the disease, they will only aim to contain it.

We are Meghan, Lora and Stephen, children of Maxine who has been diagnosed with a cancer the the hospital say they can't operate on. We are going to keep fighting to get our Mum the life saving treatment she needs. Please help us on this journey.