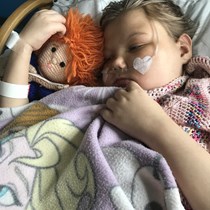 Weʼve raised £7,249 to help fund a solicitor to fight for Melody Driscoll to get her the treatment and medications she needs and give her the best quality of life

Help fund a solicitor to fight for Melody. To get her the treatment and medictions she needs to keep her pain free and stop her symptoms and bleeding. To get melody home with her family who adore and love her so very much. Please visit her page to read her incredible story: https://m.facebook.com/Melodyinmind/