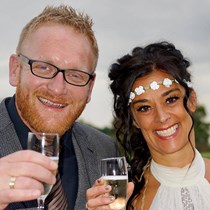 Weʼve raised £43,310 to help my daughter who has very rare and aggressive cancer, to get appropriate treatment in Germany.

In August 2014 our lives were shattered. Our beautiful, kind 15-year old daughter Sofie had cancer. For six months she’d been feeling unwell and been to the GP many times. Twice she was referred for scans but on both occasions sent home without one as it wasn’t deemed necessary. We were worried as she wasn’t getting any better. Then, on a family visit to Denmark, Sofie went to see the film The Fault in our Stars. It made quite an impact on her and the next day she asked her grandma about two lumps she found in her belly. In Denmark they gave her a scan straight away and it turned out to be Desmoplastic Small Round Cell Tumor, a very aggressive and rare cancer. By this point the cancer had spread from her pelvic area to her bones, bone marrow, kidney, liver, lungs, bladder and lymph nodes. Prospects were bleak and I felt sick to my stomach with anger and panic and fear. Losing your child is every parent’s worst nightmare and to know this could’ve been diagnosed so much sooner with due diligence was heartbreaking. What if they’d done the scan six months ago? Sofie was terrified but stayed incredibly brave and strong. She was determined to overcome this devastating illness and two years later she’s still here and still fighting. However, two years of chemotherapy has taken its toll. It slowly sucks the life out of her and for each cycle the suffering gets worse. Today the doctors took her off it as she can’t take anymore. That’s why it’s time to do something different. We’ve done a lot of research and found a clinic in Germany, www.arcadia-cancer-treatment.com where they offer Whole-Body-Hyperthermia, a treatment in which body tissue is exposed to high temperatures. Trials have shown this can damage and kill cancer cells, usually with minimal injury to normal tissues. We’re desperate to get Sofie this treatment and maximize her chance of survival. You can help by DONATING and SHARING this. Little strokes fell great oaks and every little amount helps. Thank you truly.

This treatment and people’s donations will make a real difference. All donations, no matter how big or small will be massively appreciated.