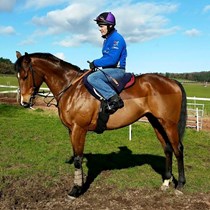 Myself and my 2 sons, Luke and Daryl, are doing a skydive on the 27th June, which was bought for us as a gift. We thought this would be a great opportunity to raise funds to go towards two local charities:

George will always be 20 years old. He will always be a friend to countless people. And he will always be an inspiration to very many. He may have only been 20 when he died but he hadn’t wasted a single moment. Every day was lived to the absolute maximum, and he had a vitality and vibrancy that means the hole in the lives of those who loved him is magnified.

he George Heath Foundation has been established as a charity by the friends and family of George to celebrate his young life and to ensure that his name lives on in the hearts of those who were close to him and in the numerous and diverse communities where he was widely known and loved.

Richard was diagnosed with testicular cancer in November 2011, aged 20, during the third year of his MEng degree in Mechanical Engineering at the University of Sheffield.

He underwent gruelling treatment for 19 months in Sheffield's Weston Park Hospital, never once complaining or feeling sorry for himself, but despite the high cure rate for this type of cancer, he died on 13th June 2013, on the day he would have left university had he been able to complete his degree.

There are no words to describe the despair we felt on losing our wonderful son and Chris and Stephen their big brother. Richard had everything to live for and the brightest of futures ahead of him, but it was not to be - his cancer was rare and aggressive and had no respect for age or prospects.

Since Richard's death we have concentrated our efforts on raising money for a variety of cancer charities, including the Teenage Cancer Trust, as Richard received such wonderful care in their Sheffield unit, but this latest challenge is a personal quest for us - to raise money for a lasting award in Richard's name which would mean he would never be forgotten and in addition would help other engineering students from Sheffield University, where Richard was so happy.

The award would be given annually with a presentation at the engineering graduation ceremony. Recipients would be given an information sheet about the scholarship and future engineers would know about Richard and his story. It would be a prestigious award that students wished to attain.

Both charities are close to us as a family due to Richard and George being well known through school, kart racing and the local scout group. Hence the reason why we thought this would be a great way to raise some funds to these amazing charities!