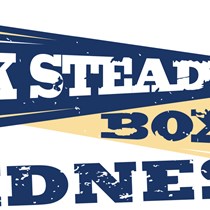 Weʼve raised £2,225 to Get Tommy O'Connor to 'Rock Steady Parkinson's Boxing' in Indianapolis,USA to gain the ability to teach other Parkinson Suffers like himself

In the surrounding areas of Widnes, Runcorn & Warrington, we will have at some point in our path to dieting & fitness, been taught, positivly pushed and helped to succeed, in our personal goals by 'Tommy O'Connor'.

Tommy was diagnosed in 2012 with Parkinson disease and is now classed at stage 2.

With being a fit man he has continued to keep up his fitness regime, but knows not all Parkinson suffers are as fit as he is, the help and support to engage people with fitness who have Parkisons are few and far between locally. Tommy on his own journey of Parkinson's discovered ' Rock Steady Parkinsons Boxing Classes' - intrigued by this group as his life time of fitness in and out of the Army has been Boxing for over 40 years.

The aim of the 'Rock Steady Parkinsons Boxing' classes is to know that every day there are ways in which people with Parkinson’s disease can enhance their quality of life and even build strength, flexibility and speed! By exercising with coaches who know the ropes, you can fight your way out of the corner and start to feel and function better.

These classes have proven that anyone, at any level of Parkinson’s, can actually lessen their symptoms and lead a healthier and happier life.

Tommy wants to provide this knowledge and service to the local people of Widnes, Runcorn & Warrington, where there are OVER 500 sufferers. Not all Parkinson Suffers are in the 'OLD' age bracket as this disease can hit people as young as in their teens.

Tommy is keen to use the skills he will learn from the 'Rock Steady Team' to locally set up fitness sessions to cater for everyones needs and ability, from the young to the old. For him to do this he needs to raise £5,000 to get the training in Illinois and set up the boxing classes in local gyms.

The next available slot for Tommy to Train, learn and gain skills from the 'Rock Steady parkinson Boxing Classes' in Indianapolis, USA is November of this year, if he misses this slot, the next one is February 2019. So its a LONG shot, but with everyones support I am convinced we will enable Tommy to achieve his Goal and get there this year!

So please help Tommy help others and the plight of Parkinson Desease suffered locally.

Thanks in advance for your support.