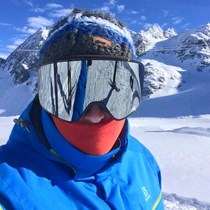 Weʼve raised £13,670 to Help a good guy and his Fiancee out after her recent diagnosis of Stage 4 Brain and Spinal Cord Cancer.

Six SKN lads on the Beryl Bravo are running the Scottish Half Marathon to raise some money in support of Mick Doherty and his fiancée, Kerry Parkinson.

Mick is unable to come to work at the moment due to caring for and supporting Kerry, full time, whilst she battles cancer.

Two days before her 41st Birthday on the 16th October last year Kerry was diagnosed with Primary Triple Negative Breast Cancer, a rare and aggressive form of Cancer and has been battling it ever since. Her only choice was an aggressive form of Chemotherapy, which had to be modified and extended from 6 sessions to 10 sessions over a 5 month period due to finding out that Kerry carries the mutated BRCA1 gene. This meant that the only option was a Double Mastectomy followed by her Ovaries needing to be removed due to the high risk of cancer developing there.

Once the Chemotherapy was complete and whilst Kerry was trying to recover in preparation for her first surgery her Father was unfortunately taken into hospital due to being seriously ill. Kerry managed to have her Double Masectomy which thankfully went well and they received some good news for the first time in 7 month, the cancer/tumour had responded well to the therapy and had shrunk by 90% and her lymph nodes were clear. 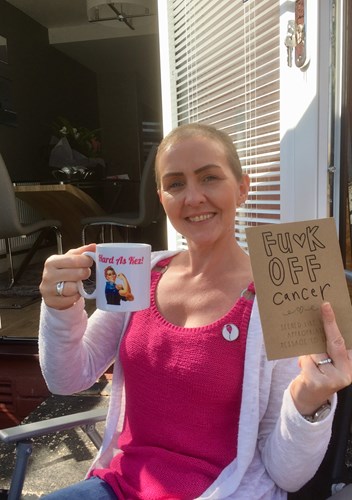 It was at this time after hearing his only daughter was Cancer free that sadly her Father started to detiorate, and passed away a week later. During that week Kerry stayed by his side understandably keeping a vigil for his final days and it was at this time that she started to suffer with back and leg pain which was suspected to be sciatica triggered by practically living in a hospital chair for a week and due to post therapy damage done by Chemotherapy.

So their next priority whilst grieving and trying to cope with her Dad dying was to try and get fit enough to undergo her second surgery (Ovary removal) which was a priority due to carrying the BRCA1 Gene. They had a few physio sessions but things weren’t improving, so they recommended a CT scan be carried out as they suspected it could be a prolapsed disc, the scan seemed ok but they wanted to carry out an MRI scan to investigate further. They then discovered that wasn’t possible as the temporary breast tissue expanders she had in were fitted with a metal valve. It was decided due to the severe pain she was in that the MRI was a priority so the Ovary Op was postponed and an emergency surgery to remove the temporary implants was carried out so the scans could take place. It was after a series of MRI’s and other tests that they were informed it wasn’t a prolapsed disc but instead something no one could have imagined, they discovered secondary Cancer in the Lumbar Spine, Neck and multiple spots in the Brain, all this the day before her Fathers Funeral.

A few days later she began an intensive course of Radiotherapy on the spine/neck for a full week and after a meeting with the Neuro Oncologist the decision was made to carry out Stereotactic (Targeted) Radiosurgery to the Brain tumours. If this treatment is successful it will buy Kerry some time but they wont know how well the tumours have responded until her next scan.

Obviously we're all hoping for the best response but they have stressed they're looking at disease management oppose to cure so there will be more treatments/therapies to follow for the foreseeable. They received another blow recently when the Clinical Trial opportunity for an Immunotherapy drug that they had been told they were eligible for fell through at the last minute due to the exclusion criteria of Kerry's spinal cord being involved.

In the meantime they are trying holistic/alternate therapies, diets and anything else that may help. Then there is the relentless search for treatments/options elsewhere. 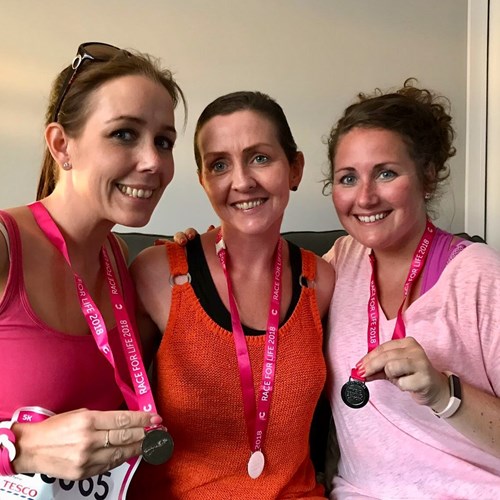 Kerry has been an absolute warrior through out this entire time and has dealt with every obstacle with a positive attitude and a smile upon her face and is a true inspiration to us all. If anyone deserves a break its this cracking couple as they've not had chance to get to their knees let alone feet since this nightmare started.

Obviously this has led to Mick having to take a lot of time off work to be Kerry's full time carer and because he is self-employed it is taking a financial toll in addition to Kerry being unable to work for the past 10 months. Any donations received would be hugely appreciated and would help an amazing couple through a very difficult time.