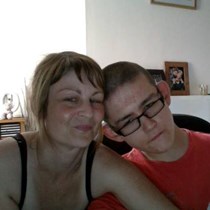 Weʼve raised £105 to help fund a rehabilitation ski trip for my son who broke his neck last year & should be paralysed, but is learning to walk again.

Mike was born in 1995 & it soon became apparent that he had Global Developmental Delay, meaning that every milestone would be a struggle & take much longer.
When Mike was 9 I separated from his Dad as the pressure of raising a child with SEN damaged the relationship & since then I have raised him as a single parent. In 2009 Mikes Dad passed away suddenly.
2014 brought 9 hours of surgery to correct a spine curvature. Imagine every bone broken in your back & the muscles & ligaments severed, then re attached, the pain Mike experienced was immense. It took a year to get Mike back on his feet & able to enjoy life again. Throughout this time Mike was stoic & never complained.
In 2015 I battled to get Mike to National Star College for a placement, where Mike could work on gaining as much independence as possible.
February half term (2016) Mike had a freak accident where he fell out of bed & broke his neck at C3/4. He should have died & I cannot describe my feelings when I found him unconscious & struggling to breathe. He spent 4 nights misdiagnosed with pneumonia, despite being paralysed from the neck down. Mike was unable to communicate as he is non verbal & signs .Prognosis from surgery was that he would never walk , at most may feed himself
Mike spent 6 months in hospital at Stoke Mandeville, doing intensive rehab. Mike is back at Star & grit & determination have allowed Mike to rebut the prognosis & is learning to walk. Everyday is a physical & mental battle with hours of physio & pain, which he never complains about.
In ITU Mike focussed on a ski trip with Star that he would work towards, seeming impossible at the time. Now he has this chance, to ski, the financial impact of his accident means I cannot afford to pay for it.I am devastated that a brave determined man who is inspirational cannot experience the goal that drove him. I have never asked for any help like this before, but would be indebted to any help given as would Mike.
Heartfelt thanks

I am Mike's Mum & feel very privileged to be in his life. He has been my absolute rock through some really hard times. Mike is funny, caring & loyal & will go out of his way to make others feel safe & loved. Drs have called him Superman & I want to give him every opportunity.