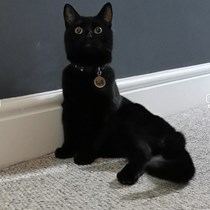 Milo needs your help – he has been diagnosed with FIP which is fatal without treatment and we need to raise funds to secure this life saving drug for him. He fell ill suddenly and there was no time to ‘save up’ as treatment must be started immediately to give him any chance at surviving. I hope you have a moment to read his story.

FIP (feline infections peritonitis) has been untreatable until recently and considered 100% fatal. Thankfully treatment is now available and has an incredible success rate with 80-90% of cats being fully cured from this terrible disease. The treatment lasts 84 days plus 84 days observation and involves a daily injection of an anti-viral drug (or a more expensive oral pill of the same drug).

The cost for the injectable drug alone was projected at £1600-£1700 for Milo, plus three lots of blood tests (to check his progress) at approximately £150 each. Three weeks into his treatment we experienced difficulties with the injections as he needed to be restrained to carry out the injection safely, and his little fragile body couldn’t take being held so tightly and it started to hurt him. He became reclusive and apprehensive of us every time we approached him. This was heartbreaking as we couldn’t explain that it was all to make him better. We made the decision to switch to the oral form which can be equally as effective but is almost twice the cost. He will possibly need more regular check ups to ensure that the drug is being absorbed fully, so that will be further expense.

We hadn’t planned for any of this and the cost increases have dealt us quite a blow. But we cannot and will not give up on him now. It is hard to ask you to give money to cats and people you do not know, but it is to save a life and that means a lot. We hope to raise enough to cover the cost increase of switching from injections to pills.

Please consider donating towards Milo’s treatment, even the tiniest amount really does help. If you are not financially able to donate, please share his story for others to see.

Milo has had such a tough start to life, he’s not even two years old and has been through so much. He was found scared and alone by a member of the public at around 10 weeks old, with badly injured back legs (car accident, or animal attack). He was taken in by the RSPCA and came to me as a foster kitten so we could bring him up to good health and find him a forever home. Sadly, he developed problems and needed surgery to correct a dislocating kneecap. During the surgery, it was decided that he needed amputation. The vet even suggested that he might need to be put to sleep! I begged them to give him a chance at recovery with three legs and see how he got on. He recovered amazingly from his surgery and despite his remaining back leg still being a bit wonky from his original injuries, he had no bother hopping around and getting into mischief – he even managed to get on top of our shed one day!! We’d fallen in love with him by this point and decided to adopt him and give him the forever home that he so deserved. We had nine fun filled months with the little monster until tragedy struck him again and he was diagnosed with this dreadful disease in February.

He is such a fighter and we are fighting alongside him. The full treatment course must be completed to give him that hope of a full and healthy life he is so worthy of. We would love it if you would be part of his story and help him along to recovery.