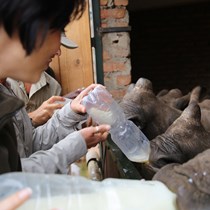 Weʼve raised £565 to help baby Rhino at Care For Wild Rhino Sanctuary which we're volunteering at in Sept. Whether you donate a lot or a little everything helps

In just a decade, more than 7,245 African rhinos have been lost to poaching. Only recently we lost the last male Northern White Rhino, Sudan, showing that extinction in our lifetime is a reality. Many poached adult Rhino leave young without a Mother and some of these orphaned Rhino end up in places like Care For Wild Rhino Sanctuary. We were lucky enough to visit CFW last year and see first hand the amazing work this non-profit organisation does, relying on donations, sponsorship, partnerships and volunteers to survive. In late September this year we will be volunteering at CFW and 100% of any money we can raise here with your help will go towards the upkeep and rehabilitation of these lovely animals in their hour of need. The monthly cost for each cared for Rhino is approx. ZAR20500 = £1200. Some examples of weekly feed costs and where raised money would be spent are as follows: Denkavit Foal Milk £50, Omepracote £45, Protexin Soluble £12, Teff hay £10, Rhino Pellets £4, Moringa Powder £3 and much more! So every £ helps :)

About Care For Wild with a testimonial from Prince Harry (from their website):

Care For Wild Rhino Sanctuary is located on a beautiful game reserve in the heartland of Mpumalanga, South Africa, where we’ve set up a treatment and care centre where we can tend to injured or orphaned animals until they are well enough to be rehabilitated into the wild. Petronel Nieuwoudt, the founder of Care for Wild Rhino Sanctuary, is one of the few people worldwide who has specialised in the care of orphaned and injured rhinos, and her passion is truly inspiring. Our mission is to save black and white rhinos from extinction. We are committed to rescue abandoned, injured, and orphaned rhinos and to rehabilitate them wherever possible. We enlist the help of veterinarians, nutritionists, ecologists, and other specialists, to ensure the successful rehabilitation and release of these animals. Over the years, Care for Wild Rhino Sanctuary has grown to be the largest rhino sanctuary and orphanage in the world. This has been made possible through hard work, trust, dedication, and good partnerships.

“These baby rhinos are at an orphanage because their mothers were killed by poachers. I can’t say where this is for obvious reasons. But I spent an afternoon with Petronel Nieuwoudt, who runs the orphanage. The youngest rhino was called Don. He was just two months old when he was found in Kruger National Park. Petronel has students and volunteers from all over the world come to look after these orphans. They pay for this experience and that money is used for milk, food, fencing and rangers for security.” – Prince Harry

My wife & I are passionate about wildlife and especially about Rhino. We have been lucky enough to visit South Africa these last few years and to see Rhino in their natural habitat BUT they are in trouble. This fundraising is our way of trying to help just that little bit. Thanks