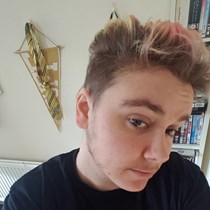 I’m an autistic trans man, and I need to get top surgery. The waiting lists are very long and I have no income for going private by myself. I came summer 2019, and have been going back and forth on whether or not to do this fundraiser ever since. Wracked with guilt, over things like ‘What have I done to deserve people’s help?’ or ‘Other people have been out and waiting longer, am I just selfish?’

Last year when I came out was very big year for me, because last year was the year I decided to be completely honest with myself, about everything – no matter how hard it was, no matter how afraid I was. So, I’ve pushed myself to answer these guilt-ridden questions honestly.

From the age of 5 I knew I wasn’t like other people, I sensed it in my interactions with others, with the way all my peers seemed to know it on an intrinsic level and avoid me. When I was 14, and going through therapy my mum told me that she first heard me say I wanted to die when I was 5 years old. That I used to scream at her from my bed ‘No one will love me, I’m not worth anything, I shouldn’t be alive’. And I thought those things going forward for the rest of my life – always wondering what it was that could make a 5 year old think those things. Sometimes I coped well with it, like it was just another fact ‘The sky is blue, grass is green, Morgan is intrinsically worth less than other people’. And other times it was much harder.

I knew I wasn’t a girl, but it never seemed like there were any other options. I spent years as a child trying to figure out what I could be, if not a girl, but everyone told me that was just what I was. So, I believed them, and instead spent decades thinking of myself as a ‘broken girl’.

During that time I was always depressed. I self-harmed, I made several attempts on my own life, and I dissociated regularly. I looked into the mirror and could never see myself there. It’s not that I hated my body, exactly, but that it wasn’t ever mine – just some fleshy thing I lived in. Looking back, I can see all the things that were gender dysphoria, but at the time, it just came together as this general feeling of being ‘broken’.

In 2018, I got my autism diagnosis. This was a big changing point for me, it was the first indicator I had that I might not be broken. It allowed me to look back over my life with context and hindsight, to understand the ways in which I was different and why. And it accounted for a lot of things, but not everything. I was still chronically depressed, I was still dissociating, and there was still this void of ‘other’ that I hadn’t figured out. Then 2019 hit, and I started my year of being brutally honest with myself, and I realised I was not broken, I just wasn’t a girl.

Since coming out, I have felt the most healthy I have been my whole life. I haven’t wanted to die, even as a passing thought, in over a year. I haven’t been dissociating. When I look into the mirror, I often don’t like what I see, but I know that it’s me that I’m looking at.

So, yes, I’ve only been out just over a year, but the journey has been much longer, and I want to keep going. I want to keep feeling like a full, authentic, me.

Top surgery is the next big step for me, I wouldn’t have to wear uncomfortable binders (which can have long term effects on your health and can’t be used all the time), and I’d be able to move, and swim, and exercise, and just generally exist, as me. It would mean the world to me.

I know lots of people don’t have the funds and I would never want anyone put themselves out of pocket for me, but if you can afford it, I would be so grateful to anyone who would help make this come true for me.

*My Goal has put been put to £8250. My initial amount was based on estimates of top surgery prices in the UK, however after booking a consultation, it has turned out the estimations were out of date. See Updates section for full breakdown. 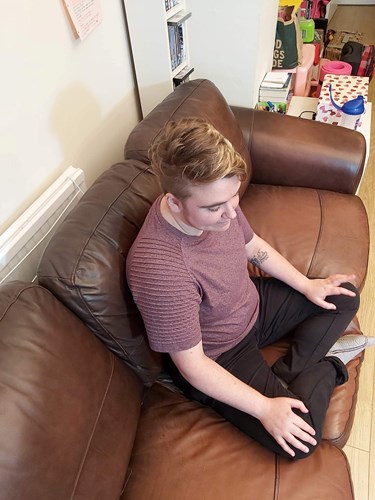