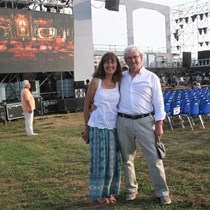 Weʼve raised £90 to Celebrate 50 years of Twinning with Hem in Northern France and Mossley.

Town twinning is an official relationship-builder which started in Europe after the second world war. The idea was simple: repair damaged relationships between France, Germany and the UK. Find towns that suffered during the wars and pair them. Then encourage people from these areas to meet, mix and get along.

Town twinning covers a vibrant array of areas, including art and culture, young people, sports, business, citizenship and economic growth. Successful twinning brings scores of benefits to both the community and the municipality. By bringing people together from all over the world, it gives us an opportunity to share problems and solutions, exchange opinions, learn from each other, and create friendships through common interests and issues.

Mossley Twinning was formed in 1972 by Monsieur Dupont, who owned mills in Mossley (called French firm), he also had business interests in Hem, a town in Roubaix (Lille northern France). The first exchanges were carried out by the Duke of Wellingtons Regiment Veterans on Armistice Day, which have continued uninterrupted since that date. No Duke of Wellingtons veterans now attend but their flag is still carried to the cenotaph on the 11th November each year.

Mossley Amateurs Open Age Football were the next to exchange in 1974 and Mossley Youth Club, Mossley Junior Football then exchanged with various age groups for numerous years. Other Groups have also exchanged, Mossley band, Table Tennis, MAODS and there have been many Civic exchanges.

A Typical Twinning trip with the town of Hem.

The Twinning Group travel to Hem each year to commemorate Armistice Day 11th November. The local British war graves are within the Cemetery at Hem and maintained by the local Town. It is quite a somber occasion but absolutely reverent to all the British Service personnel especially those who lost their lives whilst gaining France and Europe their freedoms. It is a tremendous display each year. Initially gathering at the Town Hall, from where there is a march in file, led by a brass band and followed at the rear by WW11 vehicles, all along the roads to the Cemetery. The March is more than 200 metres long and the streets are lined with ordinary people waving the Union Jack and the Stars and Stripes. It’s a really emotional feeling and an honour to be there.

The graves themselves are immaculately kept by Hem even though its more than 75 years since WW11 ended. A commemoration address and full service including wreath laying is given at the official ceremony in both French and English followed by prayers of remembrance. After this, there is a roll call for each of the 14 British service men and after each name a member of Twinning lays a wooden cross with poppy on that service mans grave. There are 14 graves in total. The fallen are:

Following the ceremony there is a small, informal gathering in the local Community Centre, “La Ferme”, to greet each other as friends followed in the evening with an official banquet of remembrance. Many local people are invited to attend this including a group of remaining French Military Veterans, Les Combatants Ancien. Gifts to the Towns are exchanged.

The Official Wreaths, Crosses and Town gifts have been funded by Mossley Twinning on behalf of the Mossley people for the past 49 years.

The following day we spend with our French host families, often having a get together in the evening before returning to the UK the following day. The costs incurred on these trips are born entirely by Twinning Group members themselves.

Next year is a very special anniversary being the 50th anniversary of Mossley Twinnings formation. During 2022 the Group would like to reciprocate by hosting a full French visit in the summer. The weekend surrounding the 24th September has been confirmed for the visit and in order to do this we will need to raise in the region of £5000. This will cover the costs of the 4-day visit. In particular we will host a banquet to celebrate the occasion. We expect a contingent of 20-25 visitors from France who will be hosted in the homes of Twinning members. There will also be special “history” related trips of interest scheduled, needing coach transport etc plus a special remembrance presentation to Hem. We intend to request a contribution from TMBC and can confirm that Mossley Town Council have kindly offered a donation of £1000. We trust that JustGiving can attract the balance needed to fund the visit’s activities.

We are all well aware of the current pressures due to the pandemic but, in a sense the post WWll war era, following which these relationships were forged, was not dissimilar in terms of the impact on ordinary people. Many families in Mossley had members who served in that period for the good of the nation and some who sadly sacrificed their lives . Did you have any?

Twinning survives to say… WE Remember the sacrifices THEY made

Some quotes from some new Twinners: -

“The French people are so hospitable”

“It was such a never forget time”

“The couple who hosted us have become great friends”

There is a lot of history to be told, far too much to tell in this appeal. It is a people thing, not a government or Local Council thing. It is a people being friends with people thing and to remember and honour those who paid the ultimate price, without which we would not have the freedoms we enjoy today.

A special Facebook page has been created with just a few of the memories of events that have taken place in recent times. A snapshot of the occasions can be found at