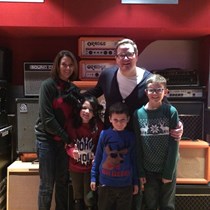 Each year for the last 16 years, our family has written and recorded a Christmas song, giving it out on CD to friends and family as our “Musical Christmas Card”. We’ve been doing it since 2006 when our (now teenage) kids were babies. Now we’ve made the songs available on digital music platforms like Spotify, Amazon, Apple, Google, Deezer - and we’re donating every penny earned from their streams and downloads to charities across the world.

Last year we rasied more than £2000 - just by people listening to these Christmas songs, and we caught the imagination of the world's media ending up on the Chris Evans Virgin Radio breakfast show, and being featured on Sky News on Christmas Day (that's a Christmas we'll never forget)! You can see more here... Musical Christmas Card charity video.

We're doing the same again this year, but we want to raise even more money for charities and worthy causes.

We got feedback last year that people also wanted to show their support for the campaign by directly donating money as well as listening to the songs. So we've set up this Just Giving page to help do just that. Thanks so much if you do want to donate - it will really help us boost the total amount.

Below is a list of the songs and the charities each one supports.

If you want to donate to a specific charity, please mention that in your comments and we'll make sure it goes to the right place.

Thanks for all the support!

The Night Before Christmas (2009) UNICEF

The Angel on the Tree (2010) Alzheimer’s Society

First Christmas (2017) Save The Children