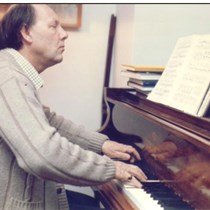 William Wynne Willson 1932-2010 was a mathematician but also an enthusiastic pianist with an eclectic taste in music. He built up a wide collection of piano music, mainly classical, and had a particular interest in lesser known composers. Keen to share some of his discoveries, he started transcribing some of his favourite and most interesting pieces using Sibelius software and set up a website called www.musicwww.co.uk (a pun on his initials WWW). During the last 8 years of his life he uploaded nearly 350 pieces, forming a unique collection of interesting piano music, free to download, print out or listen to on his site.

Since his death his family has kept the website going, with the intention of adding to it the sheet music which William had collected but not had time to transcribe. Unfortunately last year we had a minor catastrophe and initially thought we had lost the whole website due to a miscommunication with the website host. After several months of trying to track down earlier versions both online and on old discs and computers we had almost given up when his old friend and colleague Geoff Wain discovered he had a backed up version on a memory stick which has enabled us to restore about two thirds of the site.

This whole incident made us realise how keen we are to keep this website going as an ongoing resource for people to enjoy. We have already commissioned a webmaster (who had worked with William and took over from him on the Lennox Berkeley society website) and he and Emma have together already done a lot of work restoring and updating the site and adding information about the collection and about William. We are now also employing a typesetter to begin replacing the lost Sibelius files.

The idea of this crowd funder is to raise money so that we can:

3 Add other interesting music and continue to develop the collection