Weʼve raised £5,612 to fund research to fight blood cancer and to support everyone affected by blood related cancers

There are 12 of us running in the Royal Parks Half Marathon on 13th October 2019 to raise money to help us finalise our Charity status. We are desperate to make NATSIRT official so we can do so much more to help fight and support those affected by blood cancer. 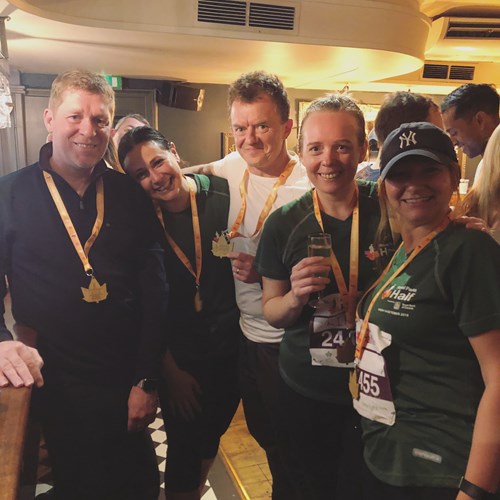 We have raised around £30,000 for blood cancer related charities so far in memory of Tristan Martin to include a tribute fund with Bloodwise. Unfortunately raising money for pre-existing Charities does not allow us to focus the money raised which is why we are setting up NATSIRT as an independent Charity which will allow us to pick one battle at a time. We are starting by focussing on a specific type of blood cancer called Acute Myeloid Leukaemia (AML) which is what Tristan had.

• myeloid cells – which perform a number of different functions, such as fighting bacterial infections, defending the body against parasites and preventing the spread of tissue damage

Acute myeloid leukaemia (AML) is an aggressive cancer of the myeloid cells.

AML occurs when specialised cells called stem cells, which are found in the bone marrow (a spongy material inside the bones), produce too many immature white blood cells. These immature cells are known as blast cells.

Blast cells don't have the infection-fighting properties of healthy white blood cells, and producing too many can lead to a decrease in the number of red blood cells (which carry oxygen in the blood) and platelets (cells that help the blood to clot).

It's not clear exactly why this happens and, in most cases, there's no identifiable cause.

What Happens to Money Raised?

At NATSIRT funds raised are split 50:50 for support and research.

We have first hand experience that the emotional effects of blood cancer are long lived and it is often difficult to get the support needed. We do not put a timescale on trauma and grief allowing people to access help when they are ready and when they most need it.

According to Bloodwise around 2,420 people are diagnosed with acute myeloid leukaemia (AML) every year and we don’t have a lot of treatment options for AML. It can be hard to treat, especially in older people who have a higher risk of developing the disease. Standard treatment is chemotherapy, and stem cell transplant is usually considered if chemotherapy fails or people relapse after initially responding to treatment.

Because there are limited avenues of treatment, and at the moment we don’t have any targeted therapies for AML, this is a type of blood cancer where high levels of research investment are needed.

Research spans from finding where the roots of AML lie - so we can combat the disease right from the beginning - to testing new treatments for people living with AML.

The Martin family and Trustees are committed to creating a legacy to benefit many.