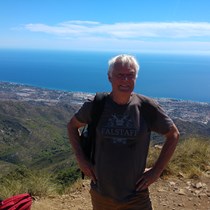 Our beloved daughter Becky has been in the intensive care unit at the Royal Liverpool for more than three months, being looked after by a truly wonderful and dedicated team of doctors and nurses.

Recently we visited and her bedside fan was broken. "Is there another one she can use?" we asked.

"I'll try, but fans are like gold dust on intensive care," replied the nurse.

We guess that, with all the expensive high-tec equipment, fans are way down the list.

Becky now has a fan again and it's really important for her. People who are critically ill have great difficulty in keeping a steady body temperature.

We thought, as it's the NHS's 70th birthday, why not buy and a donate a fan to the unit?

But here's the thing

Infection control is essential on an intensive care ward. Standard fans with a blade are not hygienic enough. At the Liverpool Royal they use this special fan with no rotating blade. But they cost £229 each. I KNOW! Who knew that fans could be so expensive?

Would you help us try to buy 4 new fans for the unit?

Could you donate something, no matter how small, and become the NHS's Biggest Fan?!

P.S. Becky is likely to be unwell for some time. We'd want her to keep one of the fans when she moves to the High Dependency Unit, then to an ordinary ward and then recuperation. We're guessing the lack of fans is an issue for other parts of the hospital too.