Weʼve raised £50 to help take two new plays to Edinburgh, London and then tour the UK.

Welcome to the Maverick Theatre Company! We are a charity dedicated to creating access in drama and theatre. This year we are delighted to be performing two plays, in rep, at the Edinburgh Festival and afterwards in London and on tour to the UK.

Based in London and Birmingham, we were founded in 1994 and officially opened by the Lord Mayor of Birmingham. We have reached audiences far and wide with ground-breaking performances, especially for socially excluded audiences and people who want to get involved in drama.

Nick Hennegan, Founder/Director, has created over 100 productions from community shows to large-scale productions. Touring the UK, the West End and internationally, we have had critical acclaim, awards and sell-out shows.

We have worked with countless people of all ages from amateur to professional and even some celebrities. We have had the support of famous names such as Sir Derek Jacobi, Kenneth Branagh, John Adams and Paul Henry.

As a charity, all our work depends on donations and funding. Funding for the arts is highly competitive and a long hard road.

So today we are asking you to kindly help us pay for our actors to go to the Edinburgh Festival this year and onwards throughout the UK. The £5,000 will cover their accommodation costs for Edinburgh and on tour. Edinburgh at the time of the festival is incredibly expensive.

1) We have a track record of success: Last year was sold out at Edinburgh for our two plays: Henry V – Lion of England and Hamlet- Horatio’s Tale. Hamlet also featured the voice of Sir Derek Jacobi and starred the actress Kizzy Dunn.

“This is a history lesson. A lesson in playwriting and adaptation. A lesson in acting, directing and production.” Catherine Lamm, British Theatre Guide, August 2018

2) After Edinburgh we will take these plays and others, on tour to schools, pubs and community settings. To engage audiences from socially deprived areas and get youth and adults involved in drama with our workshops. Edinburgh gives our charity exposure and reputation. This is vital in our mission to help people access drama careers and to engage new audiences.

3) Maverick has a proven track record in national and international tours since 1994! See our website at: https://www.maverick-theatre.com/

4) Maverick is an award winner: including the Guinness Theatre award through the Royal National Theatre, The Society of London Theatre's Stage One Bursary and numerous others.

5) Maverick has created over 100 productions from small to large scale!

So, what are the plays about this year?

P.A.L.S: A play about growing up on a Birmingham Council estate. It was a roaring success. First performed at the Billesley Pub, Kings Heath in 1998 and later a small-scale tour. It was shortlisted by the Society of London Theatre for a 5-week run at London’s St James’ Theatre in the West End.

“It is a comedy about four kids – Pete, Andy, Linda and Sue, hence the PALS title, growing up on a council estate in Birmingham…They discover each other, friendship and the ups and downs of life. Really it is my life story.”

Romeo and Juliet: This is Shakespeare with a twist: Nick replaces the Montagues and Capulets with Blues and Villa fans. A modern day classic revamped and Brumified!

So, what do you get from this?

A. Our undying love and appreciation for helping us reach Edinburgh.

B. Your chance to support new. talented actors. To help us showcase the best of Maverick.

C. By supporting us, you are helping build that springboard for our national tour of schools, pubs and community settings. This will help enable the careers of new actors, writers, directors and technicians from socially excluded communities.

D. Every penny you give to Maverick is a step towards our main mission: To give access to working class people in socially deprived areas as audience members and those interested in a drama career.

So kindly folk, please donate to our worthy cause! Without your support Maverick would not happen.

We are really grateful for every pound we receive. We love what we do. It is your generosity that keeps our mission alive! 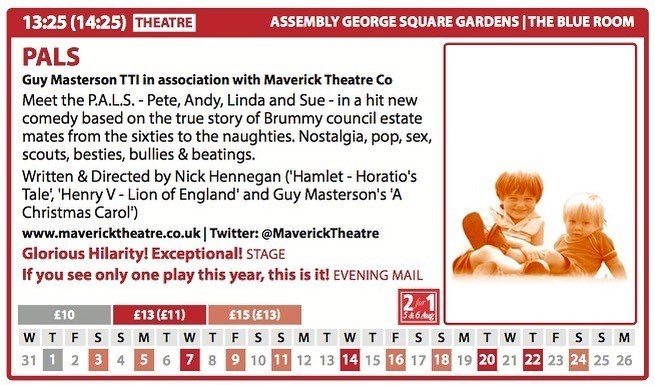 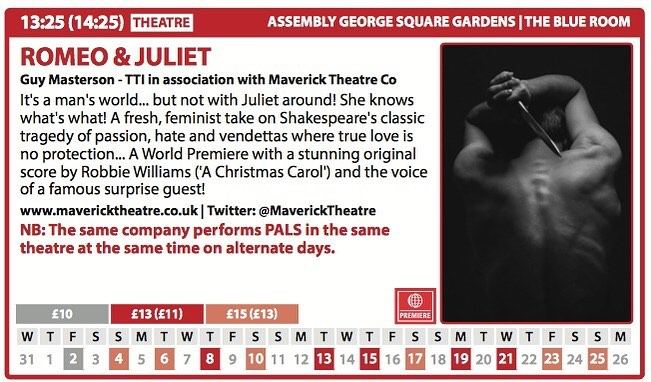 Maverick is a working-class theatre company, launched by the Lord Mayor of Birmingham in 1994. It's mission is to increase access to the performing arts.