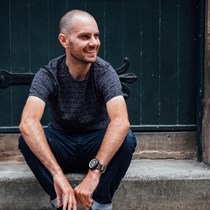 This June, Sommet Cycling founder and guide Nick Frendo will be clipping in to undertake an epic Continent-spanning fundraising ride in support of men’s health charity The Movember Foundation. It’s a dig-deep bucket-list of a route – ticking off some of Europe’s most demanding and breathtaking roads, from Biarritz to Bolzano – and a challenge driven by a very personal motivation to champion the Movember cause.

The challenge: A ride of 3000 km, scaling some of Europe’s highest peaks with more than 40,000m of ascent – the equivalent of climbing Everest 4.5 times over. The goal? To raise awareness and money for Movember’s vital work around men’s mental health and suicide prevention. My route will push me to tackle cycling’s toughest sommets, taking on the Pyrenees, Mont Ventoux, the French, Swiss and Italian Alps, the Stelvio and, finally, the Dolomites.

Here's where you come in. My goal is to raise as much money as possible for charity and here's the link to that page . A major sponsor has pulled out with only two weeks to go and put the trip in jeopardy. Without your support I may have to shorten or cancel the trip.

Your support is gratefully appreciated.