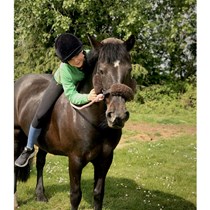 Weʼre raising £4,000 to Support the RAC saddle club and help them continue to provide help to young people with mental health illness.

A year ago my daughter, Josie, became seriously unwell with anorexia nervosa. At the time she was a Trampoline Gymnast for Great Britain. She had to give up all sport and was even restricted to only being able to stand for short periods of time. We opted to follow family based therapy and to avoid hosiptal admission. This meant I had to give her continuous close support and treatment at home. I still had to take her sister to ride and look after her horse daily, so Josie came with us. During our visits to the stables ( RAC Saddle Club), Josie developed a connection with a pony called Rosie. Over time, with support and encouragement from the staff at the yard, slowly Josie began to get better. As she grew stronger and better she started to ride. We are now a year from the time when this all began and I have a happier, healthier child, who has developed the most amazing connection with a very special pony. Josie still needs my support on a daily basis, but I honestly believe that we would be a long way from where we are today if the RAC Saddle Club had not be there for us. There are many other young people they have helped in similar ways. The financial implications of the global pandemic will have a huge impact on this club and I want to do everything I can to help, which is why I am running a half marathon to raise money on July 19 2020, exactly a year to the day that Josie first sat on Rosie. This will push me to my limits as I gave up running over 10 years ago due to joint problems and I have only just started again in the past 6 months. I hope to raise as much as I can to keep the RAC saddle club in a position to be able to help young people like Josie.