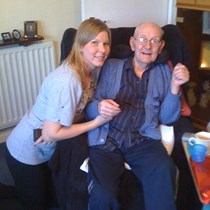 Weʼve raised £2,542 to Help raise funds for Mr Fenwick to overcome his loss of his good friend Reiver, who was found dead in a ditch with a broken leg.

AN Army veteran been devastated by the discovery of his beloved warhorse – dead in a ditch miles from where she went missing. Ricky Fenwick, 47, of Chester-le-Street, had made an impassioned plea for help in finding the highly-trained mare Reiver, who had helped him overcome his post traumatic stress disorder. Mr Fenwick, who led the Queen’s Bays reenactment group on tours across the UK and Europe, believed the horse had been stolen after a fence was knocked down in the field where she was kept in nearby Plawsworth, between Tuesday and Wednesday morning.

Although Reiver will never be replaced, I would love to be able to raise some funds to look for something suitable for Mr Fenwick to fill a hole Reiver has clearly left.