Weʼve raised £3,890 to improve support for people with Charles Bonnet Syndrome(CBS) & show the world we can still do the things that bring us joy after sight loss.

Esme’s Umbrella is the pioneering organisation for support, awareness and research. They helped me with no end and continue to support me today.

I am determined to create more awareness of CBS and raise the much-needed funds to support those who are dealing with the condition, on top of their sight loss journey, especially in the times we find ourselves in. Esme’s Umbrella have recorded that the anxiety and isolation of lock-downs have exacerbated episodes of CBS and people's hallucinations have become much more frightening.

In the two years of my blindness, I have started on a wellness and self-care journey. One of the things I find helps the severity and longevity of the hallucinations is exercise – regular yoga practice and walking.

With all of this in mind, I have decided to do a fundraising event to raise money for Esme’s Umbrella (www.charlesbonnetsyndrome.uk), I intend to walk in and around Manchester over 10 days walking 10 miles a day - 100miles in total! Why you ask! I want to show the world that sight loss is not the end and we can still do the things that bring us joy. It is also a chance to create the awareness of CBS that is needed, i hope.

This is an incredibly common condition which affects people who have lost over 60% of vision. It causes vivid, silent, visual hallucinations, which range from disturbing to terrifying. It is the brain firing up and creating its own images. For some, the hallucinations are constant, from the moment they wake up to the moment they go to sleep. Some see colours, shapes, patterns, blurred words, faces, characters, and then there are the scary ones, like animals with drooling snarling teeth, spiders and snakes. At least half of the 2,000,000 people in the UK with sight loss will develop CBS but there is little awareness of the condition, either among health professionals or out in the community, despite it being documented 300 years ago. Too many people assume – wrongly – that the hallucinations mean a mental health condition and confide in no one. 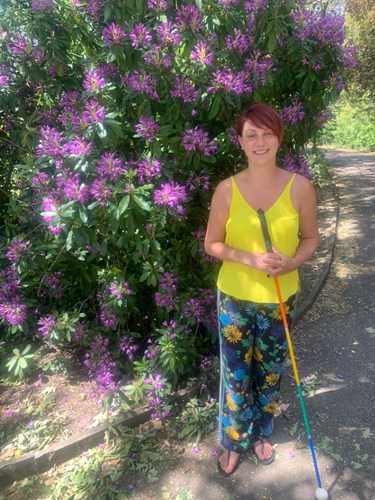 Currently, Dr Dominic Ffytche - Reader in Visual Psychiatry at King’s College, London – is the sole, globally-acknowledged expert and first researcher in CBS. You can count on one hand the number of CBS research projects – and all in the UK – but, though minimal, they have helped the understanding of this perplexing condition. No two people with CBS have the same experience and much more medical, physical and psychological support is needed. Not only is there a lack of awareness and research, there is no pathway for diagnosis, treatment and support.

Thank you in advance for any contributions made and shares.

In August me, volunteers, my friends and family are walking 100 miles to raise awareness and funds for Esme’s umbrella ☂. I wouldn’t be able to do this without everyone’s support.