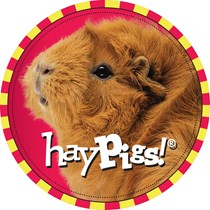 Weʼve raised £240 to help fund the rehabilitation and re-homing of the NorCal700, over 700 guinea pigs rescued from a hoarding case in northern California.

Late last year, Los Angeles Guinea Pig Rescue responded to a request for help from the Animal Control of a small town in Humboldt Count, CA, in the US. They were seeking assistance with a hoarding situation and had estimated it involved around 200 guinea pigs.

After driving 10 hours to assist, LA Guinea Pig Rescue were confronted with a far greater challenge than they had initially expected:

"Upon arrival I observed guinea pigs all over a yard that resembled a junk yard. Two ramshackle sheds attached to the home contained stacked kiddie pools overflowing with guinea pigs. Random cages set up with animals everywhere. No food in the cages, water bottles with thick green sludge inside were provided for some of the cages but most contained no water. There were 300+ guinea pigs on the ground competing for what little food and water there was. They were fed raw potatoes, some pellets, yellow hay and a dish for water that would last all of 3 minutes as they all dove for it and fought over it as soon as it was put down."

"The sheds contained stacked kiddie pools stuffed full with guinea pigs. Many mamma's with teenie babies that were being trampled. There were 411 pigs in the pools and cages."

"Many animals were in terrible condition and I observed multiple bites, scurvy, abscesses, mange as well as ringworm in the population. No adequate water access and no adequate or appropriate food." 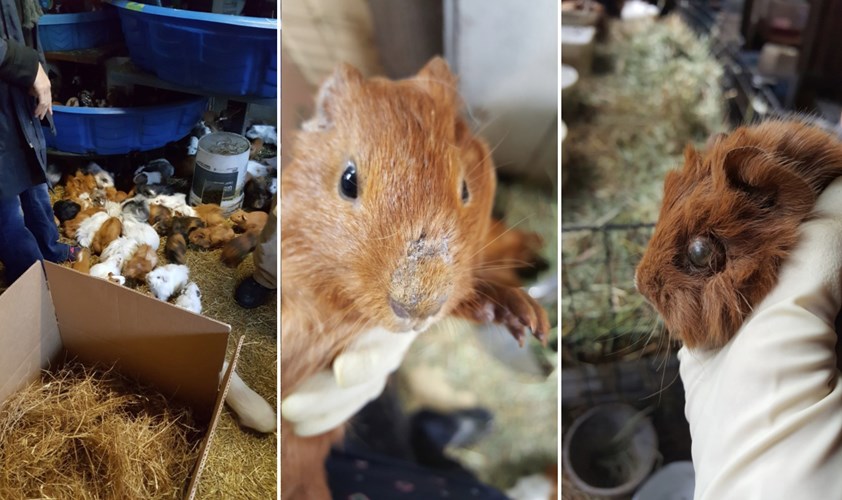 They systematically set about separating and sexing all the guinea pigs, counting and medicating as they went along.

To put an effective stop to the breeding they brought all 411 females back to their ranch in Chatsworth, CA. But to make matters worse, they estimated that 80% of these females were pregnant. Guinea pigs have an average of 2 - 6 pups per litter, and a gestation period of just 8 weeks, so it was not long before they had even more piggies to deal with.

Despite some incredible support from volunteers and donations, LA Guinea Pig Rescue still need our help. With all the medical attention, feeding and neutering required, their average weekly bill is currently running at around $1300 and there is still lots of work to be done. Ultimately their goal is to find new forever homes for all these piggies, but this will take time and energy as well as funds. Any donation, no matter how small, would be greatly received.

At HayPigs!® we are committed to helping and supporting the guinea pig community whenever we can. We see the incredible work rescues are doing all over the world and have made it our mission to bring this to everybody's attention. Every piggy deserves a loving home and if we all come together, we can make a big difference. Thank you for taking the time to read this and if you have donated, we can't thank you enough.

To find out more about the incredible story of the NorCal700, check out LA Guinea Rescue's website and YouTube channel:

Rik and wife Helen are co-founders of HayPigs!®, a family run business that specialises in design and production of premium toys, feeders and accessories for guinea pigs and other small animals. www.haypigs.com