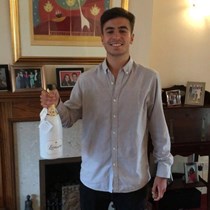 Weʼve raised £7,600 to help reduce the rate of male suicide in the United Kingdom.

Hi everyone. My name is Matthew Legg. I’m 21 from Surrey and currently a student at the University of Bath. From August 2017 – January 2018 I suffered with depression which forced me to defer my studies until next year. I was left at times feeling unable to hold a conversation, exercise or speak Spanish (a passion of mine). Just being awake was an effort. It was by far the worst period of my life and traumatic for those around me who also suffered seeing a loved one experience mental illness.

Throughout my episode I received the correct medical and psychological treatment and am now thriving back in Bath keeping myself busy until I can resume my studies in October. I’m a regular (even if mates disagree) lad like most out there who end up suffering from depression and other forms of mental illness.  Fortunately, I had a huge support base specifically my family, my close friends and my girlfriend. I also had financial support. Some people aren’t anywhere near as lucky as I was in my situation.

Suicide is the single biggest killer of men under the age of 45 in the UK. In Britain 84 men a week commit suicide. In 2015, 75% of all UK suicides were male. These statistics are truly horrendous when we consider how preventable many male suicides really are when each case is treated appropriately. Prevention and reduction of male suicide is definitely achievable.

As a result of recognising this, my cousin and I have decided to raise some money to support a number of charities who are aiming to reduce the rate of male suicide. We are organising a football tournament in Wembley on June 16th. Places are still available. All abilities welcome. There will also be live music, food and televised sport for those who come to support the cause without participating.

In addition, we are setting up this crowdfunding page so that anyone who would like to make a donation to support these charities can do so. Your money will be going not just to CALM (who we are directly working with) but other charities and foundations such as the Shaw Foundation, Project 84 and others which all fight for the same cause. We have opted for Crowdfunding as opposed to Just Giving as with Just Giving we can only support the work of one charity and we want to help a number of organisations.

In the case of CALM your donations will go towards:

• Offering support to men in the UK, of any age, who are down or in crisis via our helpline, webchat and website

• Challenging a culture that prevents men seeking help when they need it,

• Pushing for changes in policy and practice so that suicide is better prevented,

• Supporting those bereaved by suicide, through the Support After Suicide Partnership (SASP), hosted by CALM, which aims to ensure that everyone bereaved or affected by suicide is offered and receives timely and appropriate support

Please can we try and get £5,000 to help prevent suicide? Come on people, let’s play our role to help stop one person at the least taking their own lives and changing their family and friends lives as well as society forever.

Okay that’s all from me.

Big love and thanks in advance,

Matthew Legg (matthewdlegg2@gmail.com for any other enquiries)

Hi, My name is Matthew Legg and I recently suffered a major depressive episode. I was lucky enough to receive vital treatment to help me from specialists. I'm working to raise for those who aren't as lucky as I was to receive treatment from fantastic mental health organisations.