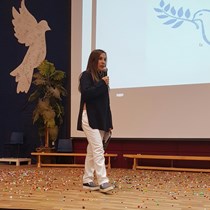 Weʼve raised £5,666 to Pay for Food packages, Teachers Salaries and Shelter for the displaced Syrians in Lebanon & Jordan.

As a Child I spent 5 years of my life in Lebanon during the civil war.
we survived in underground basements at a time when Syria' interference caused more instability. I was conditioned to distrust and even to hate Syrian people, i Never imagined back then that I would one day dedicate my life to helping them, but I have come to realise that individuals are not Nations and citizens have NO say in what their governments do.

2 million Syrians have crossed the boarder into Lebanon, a tiny country with no natural resources, its own population of 4m and high unemployment.
In the Beqqa valley alone there are more than 900,000 Syrians.
We are consistently at the camps and schools (FB: Nowell's Mission).

April 2017, we are in Jordan, so far we have delivered Teachers salaries for a school at Azraq camp, delivered food packages, working on a micro-finance project and on Permaculture gardens that will empower refugee families to become self-sufficient.

Next month we move on to Lebanon, we will deliver teachers salaries, food packages, clothing and shoes, we will also focus on a group of Parents at one of the camps who do not allow their Children to go to school but send them to the fields to pick potatoes and other vegetables for $3 a day.
Our aim is to empower Parents to make enough money for rent and food so that they send their Children to school.

The reason we personally deliver everything is because we have became disillusion with many of the large Charity organizations, where the cost of luxury offices, accommodation, 4WDs etc means
that little of the money people donate actually reaches the refugees.

It is important to note that everything we collect is hand delivered to the refugee camps, to the schools, to the Orphanages, all our expenses are paid by us.

From Sydney, i have dedicated the last 5 years of my life supporting Syrian refugees in Lebanon & Jordan (FB: Nowell's Mission). We pay Teachers, distribute Food packages, Blankets, underwear, Beanies, School Bag... and focus on getting Children off the Streets and into School.