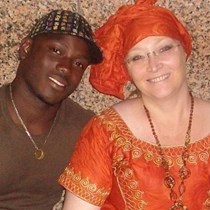 Weʼve raised £60 to To reprint our charity album, Nyangy. sales raised enough to start building a school for the children of Abobo but we need more to finish it

Sidiki Dembélé is a musician from Ivory Coast, who now lives in Manchester, UK. Back in his home city of Abidjan, in 2010, a terrible civil war broke out and a bitter onslaught ensued. His already impoverished community of Abobo took the brunt of the violence over five months, between 2010 and 2011, and many children lost their parents or fell victim to the aftermath of the siege. The country is slowly regenerating and much progress has been made, but education is still very much a luxury, available only to the wealthiest in the community.

In 2015 Sidiki organised The Brothers Tour, a fundraising project across the UK, involving both professional and amateur musicians, Africans and Europeans, and successfully raised enough funds to buy land and start building.

Sidiki is keen to get The Brothers Tour 2017 on the road - we still need to finish the building and raise the roof, so to speak!

We need to raise enough money to fund the reprint of our companion cd, Nyangy, composed, arranged and performed by Sidiki and friends, which sold out in 2015. With the goodwill and generous hearts of our friends, we can see this project through to the end; and then the real work begins!
This is a project for life, and the building is just the beginning. But for now, please help us to get 400 copies reprinted - there are people waiting to order!

This is an amazing project which will keep us occupied for the rest of our lives as we try to improve the life chances of the children of Abobo, and help the community to sustain them!