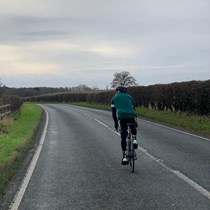 Back in December 2019, Rob Burrow was diagnosed with Motor Neurone Disease (MND) and much like the entire rugby league community, Oliver Holmes expressed his desire to help raise funds for Rob.

Holmes will be joined, socially distanced, with a friend or colleague during the course of the marathon challenge of 100km cycled each day for a week – totalling 700km in recognition of one of the greatest #7’s that Super League has seen play the game.

Speaking about the fundraiser Holmes said: “I’m doing this on behalf of Castleford Tigers as a club to raise money for Rob Burrow’s fightback fund and the Motor Neurone Disease Association. The attitude shown by Rob in everything he has done has been awe-inspiring and I just want to play my part in helping him, his family and the MND Association in their research to find a cure for this disease.”

Castleford’s #11 Holmes will be entering the off-season following this challenge but became a keen cyclist earlier in the year during the suspension of the Super League season.

“Initially I was looking for different ways to exercise and originally was going out on an old mountain bike, not the best bit of kit for road cycling, but since then I’ve got hooked doing about 20 or 30 kilometres very regularly as it gets the legs moving and is really good for recovery. So to be able to combine my new hobby with a fundraising cause for Rob it will be really special for me.”

Donate to Oliver’s challenge on this Just Giving page, any donation you can give will be greatly appreciated.