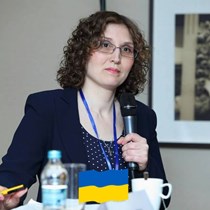 Weʼre raising £10,000 to help women and children escaping the war in Ukraine on their way to safety

I am a UK academic of Ukrainian origin. My country is fighting with a terrorist state of Russian Federation, which has decided to re-draw country borders and take the whole world backwards from peace living.

I am trying to help Ukraine to survive in this existential warfare for democratic values by helping people escape the horrors of war and not let the enemy take women and children as hostages or kill them. While I am devising a more global support effort with the humanitarian camps at the border from the Ukrainian side, specific women and children require small support to be safe.

This page has started in an effort to fund transportation for the family of my friend, Ganna Starynska, to reach the border. She did not have her own transport and there was no public transport. It took only 3 hours to drive from her village to the border, but at the time she was told that one seat from her village would cost $250, and the price had been rising quickly. She has three children and her sister-in-law has two children. So, we were looking to raise enough for two women and five children to make their way to safety. Since then, Ganna has made the way for Poland with her children, but her sister-in-law stayed behind unable to make it to the place where she could join the transport.

We have managed to collect more and decided to turn this page into the one that would enable me to help vulnerable individuals (women with children, elderly, etc.) to reach safety and obtain humanitarian support in places to which the large humanitarian efforts have not reached.

If you are willing and able to support larger scale effort which are working on together with Ukraine Charity, please see my other JustGiving page

British academic of Ukrainian origin, passionate about people's lives and trying to do whatever possible to save women and children running for safety from war in the heart of Europe waged by Putin's regime.