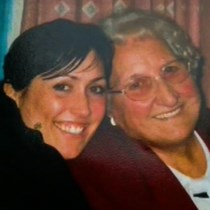 Weʼve raised £897 to fund a memorial and a donation to commemorate the life of our beloved Olive Cooke.

Its coming up to 2 years since we tragically lost Olive Cooke. We as a family, want to create a lasting memorial to remember our Mother, Nan, and Great-Nan... or 'Big-Nanny' as her Great Granddaughter calls her!

Olive touched the lives of so many with her tireless fundraising, her stories, humour and determination.

Many people were moved by Olives story. We are providing a memorial bench which will be a place for anyone who wishes to pay their respects and wants to remember her. This bench will be placed in the lovely gardens of The Bristol Cathedral. Olive was well known to many at the Cathedral as a familiar face selling poppies to mark VE-Day.

Amnesty International : One of Olive's favourite charities. She took a keen interest in all humanitarian issues, not just in our country but internationally.

Age UK : A wonderful charity that looks after our aging population, providing everything from welfare advice to companionship for those in need. Olive would visit elder friends less able bodied than herself and help however she could.

The Royal British Legion : After her Father served in WW1 and then her first husband was tragically killed in WW2, Olive vowed to sell poppies which she did for more than 70 years, come rain or shine and throughout the season. The British Legion remembers and supports Service-people and their families and is a charity that was very close to her heart.

Hi I am Jess, I am one of Olive's Granddaughters. I have been a Nurse for 12 years and I now live in East Sussex. As a family we were shook up by Nan's death, the circumstances and media attention that followed. We now would love for her to be remembered in a peaceful way