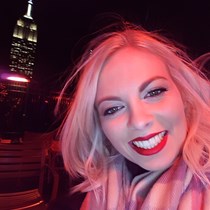 This has been written by two of Livs best friends who want to help share her story. Until now this has been kept private and many people are unaware that Liv has been dealing with an invisible condition. If you have 5 minutes to spare to read Livs story, we would be extremely grateful.

Liv is 28 years old and in 2016 she was diagnosed with Relapsing Remitting Multiple Sclerosis (MS). Liv began experiencing symptoms in 2014 but had a delay in her diagnosis due to doctors attributing them to other causes. It wasn’t until she woke up one day completely blind in her left eye; that doctors began to suspect MS.

Liv developed scoliosis (curvature of the spine) as a teenager and underwent a gruelling 9-hour spinal fusion operation to prevent her from ending up wheelchair-bound. After talking to Liv about her MS diagnosis, our hearts were broken to learn that despite going through the spinal fusion and a lengthy hospital stay, she now again has to face the possibility of ending up in a wheelchair due to MS.

MS is with you for life. It is a degenerative condition affecting the nerves. When you have MS your immune system attacks your nerves by mistake, damaging the brain and spinal cord and often presents with a wide range of symptoms. Learn more about MS.

MS is a hidden disability. During periods of remission, life for Liv may seem normal to the outside world, but what you don’t see is her struggling with extreme fatigue, brain fog, chronic pain, tingles, optic neuritis and limb numbness. Due to these symptoms, Liv has had to leave job as a fundraiser and now volunteers her time instead, when she feels physically able.

For the past two years Liv has been taking fortnightly disease modifying therapy injections to slow down the progression of MS, but these injections in themselves cause debilitating side effects meaning this treatment needs to be stopped. The injection is only 20-30% effective and Liv’s recent MRI scans show that new lesions are appearing. Other medication options come with the possibility of more terrifying and life limiting side effects.

Liv constantly lives in fear of a new relapse, and even worse a relapse that may remain permanent. Life is full of uncertainly, but what is certain is that one day she will suffer a relapse that her body will not recover from.

Livs only hope of halting her MS is Haematopoietic Stem Cell Transplantation, or HSCT. This is an intense chemotherapy treatment for MS and it aims to stop the damage MS causes by wiping out and then regrowing the immune system, using their own stem cells. Learn more about HSCT.

HSCT has been around for a while, but it has recently resurfaced in the media due to Hollywood actress Selma Blair and BBC correspondent Caroline Wyatt both documenting their treatment.

We are asking for help to raise money towards this treatment. HSCT isn’t widely available on the NHS, and it costs tens of thousands of pounds to have privately in the UK. Liv was offered a place from March 2020 at The A.A Maximov Hospital in Moscow, Russia to undergo this therapy (unfortunately this has been delayed until the Coronavirus pandemic is over). This centre has gained vast experience in using HSCT to treat MS and their results have received support from experts in the field. The £42,000 will cover most of the cost of the treatment and hospital stay. With Liv and her family covering additional costs.

It will involve a period in isolation and approximately a month stay in the hospital recovering.

A note from us

If you’ve made it this far, thank you! We can’t do this without your help.

We have watched Liv come to terms with her diagnosis and live with MS for the past 3 and a half years. We are incredibly proud of how strong she is and how much she pushes herself to go out and do things despite her symptoms or how unwell she may feel.

This isn’t a story for people to feel sorry for her, Liv is an extremely private person and for her to ask for help is the hardest thing she has ever done.

We want Liv to be able to return to a normal life. It is easy for people to take for granted waking up in the morning and being able to go to work, socialise with friends, or even have the energy to cook for themselves. But for someone who gives most of her time to charity, she deserves this, and any contribution will change her life forever.