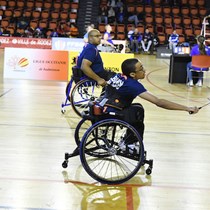 I was born in Nottingham with a disability known as Spina Bifida. As a child sport was never really on my mind as I had no idea what was out there for those with disabilities like myself as a full time wheelchair user.

My first taste of wheelchair badminton was with a club called Nottingham Blazers, setup by Elaine Spray in 2005.At first I was very reluctant to go but my Dad eventually persuaded me to at least go try it out. The quick pace of the game and how tiring it could be was very surprising and immediately I had fell in love with the sport and I was naturally quite good at it and picked up the techniques pretty quickly.

In August 2007 I entered my first competition, the 4 Nations Disability Badminton Championships in Cardiff. Although I didn’t manage to win a game it was a massive learning experience playing against players from around the UK and some of National/International standard.

It was the 4 Nations disability Badminton Championships in 2008 where I managed to win my first medal coming runner-up in the wheelchair mens doubles. Over the next few years I had kept on improving, winning my first 4 Nations Gold medal in 2009 in the mixed doubles with former Notts Wheelchair Paula Robinson. Around this time disabled Badminton was rapidly growing in the UK and the 4 Nations became a series with 4 tournaments being held a year in each the home nations (England, Scotland, Ireland, Wales).

I entered my first International competition in 2011, the German Open International which was another very big learning curve and at the end of 2011 I repeated my treble feat in the 4 Nations Championships.

ParaBadminton is now a Paralympic sport and will make its debut in the Tokyo 2020 Paralympic Games. Para-Badminton continues to grow rapidly both domestically and internationally as the games draws ever closer, with the World Championships being hosted in Ulsan City South Korea on 22nd – 26th November.

Even though I represent my country at International level, all players have to 100% fund for themselves tournament entry, flights and accommodation. So I’m looking for support in the form of small donation to help continue my dreams, goals and aspirations.

My kit is currently sponsored by Babolat and coached at Notts BA performance centre at Chilwell Olympia.

Other Notable Achievements at International Level

1. To be selected to compete in the 2020 Paralympics in Tokyo 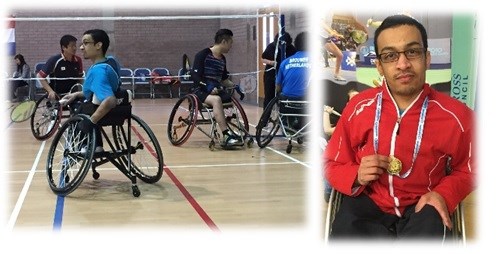