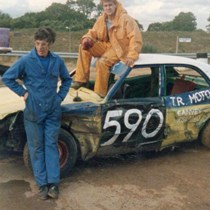 On Sunday 21st October this year, I shall be taking part in a Banger race, at the Arena Essex Raceway, in Purfleet, Essex, in the PRI Legends Meeting for the Ronnie Martin Memorial Trophy. Now, I do not consider myself as a "Legend", I prefer to say "Veteran", but I was lucky enough to race during the 80's and 90's, with some real Legends of Ovals, and many fond memories of racing at one of the premier tracks of its time. In fact, I took part in this meeting 2 years ago, having not raced a Banger since 1987, but the car that was built for the meeting, had problems and although I took part, the day's proceedings, and some money was raised, things didn’t quite go as were hoped for!

Banger racing started for me, as a 19 year old, back in 1983, when the A60 car was the car (or weapon) of choice, and raced Bangers for 4 enjoyable years, before I moved in to a "non contact" formula, in the form of Group A Hot Rods, (still racing at tracks like Arena Essex, having some 4 years very successful racing, during which time I became British Champion.

For those of you who are not familiar with Banger racing, it is a "full contact" type of racing, with suitable, stripped out, and carefully prepared cars, completing against 25-30 other similar vehicles, on a 1/4 mile tarmac oval, of around 15 laps per race. The idea is to complete the race (hopefully), with full contact allowed…pushing, nudging, spinning cars in front to gain positions. The car that completes the distance quickest is the winner.

So, back to 2018, and the 21st October to be precise…I shall be doing it "one last time", and my aim is to raise as much money as possible for two different worthy causes. The first for the Meningitis Research , a charity very close to the racing community at Arena Essex, and the second is the Amy May. My target is a tough one, (hence the early begging bowl…lol), and I would love to raise a total of £1500 - £2000, giving both charities 50% each of all the money raised.

Now, I am not looking for sponsorship per say…the car and its preparation will be funded by myself, but I would like to call upon my family, friends, friends of friends, business contacts, and anyone else, to dig deep, and make a donation. It does not matter how much, whatever you can afford or feel you would like to give, would be truly fantastic! Everyone who donates will get their name or business name, on the car being raced on the day. I will also have an updated list on this my new Facebook page, 'One Last Time' ,of all the names and businesses. I shall be approaching the local Newspapers (Evening Echo/Standard/Yellow Advertiser) to drum up awareness and promote the race meeting itself.

I have set up a Facebook page "One last time", which will have all the news and build up to the meeting in October. I will be posting regular updates on the build of the car, information and details of the meeting itself in October, a competition for a chance to win a couple family entrance tickets to watch the race meeting, and a running total of money donated/pledged, so please send me a friend request and I'll happy add you, and please like and share the page…the bigger the audience the better chance of reaching the goal ! I have set up a Just Giving page for online donations, so please help me, to help others.