Leanna is the World's No 1 Female F31 Club Throw Athlete. She began her athletics career in 2002 with Shotput. Her highlights as a junior athlete include U15 Regional Champion 2002 & 2003, U15 National Champion 2003, U17 National Champion 2004 & U20 National Bronze Medallist 2004. Leanna was also awarded the prestigious npower Sportswoman of the Year Award in April 2004 for the West Midlands Region.

In 2011 Leanna embarked on the senior chapter in her career. In 2013 she was awarded the title of CP Sport's Most Improved Female Field Athlete and in 2014 she added Club Throw and Discus to her disciplines. In 2015 Leanna set two Age Group Records as an F31 in Shot and three in Discus. In addition she was National Silver Medallist in Nottingham in all of her three disciplines in competitions against athletes of different classifications. In her debut international qualifying competition in 2016, Leanna gained her World No 1 status at the IDM Grand Prix in Berlin, followed swiftly by becoming the 2016 Female Club Throw Champion at the England Athletics Championships in Bedford. Leanna continues to strive to be the best athlete that she can be; her hopes of being selected for Rio Paraolympics 2016 were dashed when the IPC opted not to select any F31 athletes to compete. However, thanks to her boundless focus and determination, she went on to win Gold in all three of her disciplines at the 2016 CP Sport National Championships in Nottingham against athletes of different classifications. She also set a new Lifetime Best Distance in the Club Throw. Leanna sees any challenge that a new season may bring not as an obstacle, but as a stepping stone for becoming a more passionate and successful British athlete. Although, due to unforeseen circumstances, she had to take a step back from athletics in 2017, she returned to Nottingham for the CP Sport National Athletics Championships where she successfully defended her Club Throw title and increased her Lifetime Best by a massive half a metre! She also gained Silvers in Discus and Shot.

Leanna is already set to do the rounds on the UK & International circuits next season, determined to make 2018 her strongest season to date. However this will only be possible with your help. For each competition she does, Leanna has to find the funds to cover entry fees, accommodation, food, capitation fee (the annual fee payable to the Local Organising Committee for each country she competes in) and travel costs, plus the accommodation, food and support of her "Field Assistant", who is required to accompany her to every meet. As well as this, she also needs to pay for the services of a carer to assist her with all of her personal care needs.

To make the progress she needs to in 2018, Leanna needs to raise enough funds to get her and her support team to both UK & International competitions.

£2,525.00 would pay for Leanna and her support team to get to just 5 UK competitions (there is usually around 10 per season) costing Leanna an average of £525.00 per competition to cover all of the elements mentioned above.

£3,400.00 would get Leanna and her support team to the 2018 IPC Grand Prix Competition in Nottwil, Switzerland

Another £3,500.00 would get Leanna and her support team to the 2018 IPC Grand Prix Competition in Berlin, Germany.

A further £4,000 would allow Leanna to pay all the necessary costs to get her to the CP-ISRA 2018 World Games in Sant Cugat, Spain, along with her support team.

An additional £6,575.00 would get Leanna and her support team to the 2018 IPC Grand Prix Competition in Fazaa, Dubai. 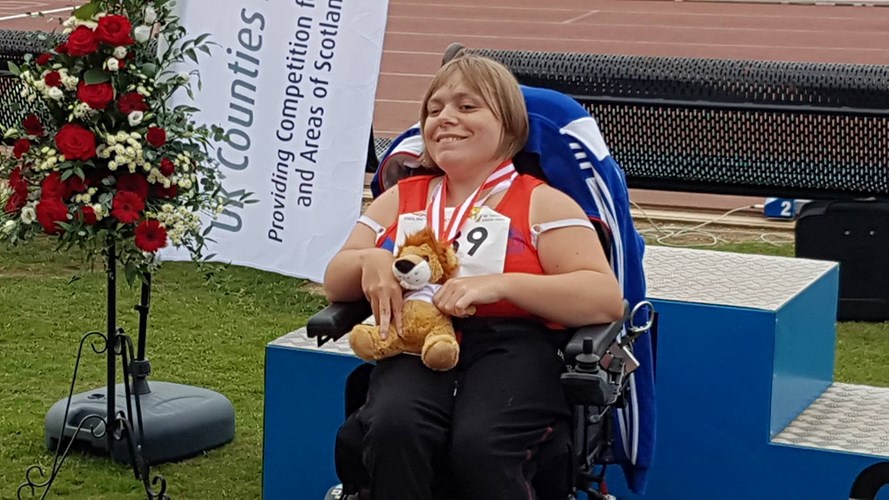