Weʼve raised £10,179 to buy and deliver (to aid providers in Poland) prioritised supplies for Ukrainians in need

Dom & Dom Jnr were well on the way to organising a humanitarian road trip to Ukraine when they were approached by Dom's brother Andrew who offered his help, and that of Pat's Party, and committee member Geof Ashton - all of whom had expertise in raising funds over many years. Hence the association was born and Dom's brother John also committed to the cause to bring much-needed resource to the endeavour.

We will set off on 20th April - now that sufficient funds have been raised to enable us to start buying additional, much needed, humanitarian supplies.

Once we have delivered the initial supplies to our selected charities and NGO’s, we will buy more vital supplies locally in Poland and we will help the charities there in any way they need. This could be transporting refugees to neighbouring countries, sourcing and distributing vital supplies locally and, hopefully (providing the UK Homes for Ukraine visas have been issued) bringing refugees to their UK host families.

The trip will be paid for by the volunteers themselves so, by donating today, together we can quickly support Ukrainians whose lives have been devastated by the events in their homeland.

To help raise extra funds for the trip we held a night of live music from Go Your Own Way, Fleetwood Mac tribute band. Drinks and dancing at The Hollygarth on Leeds Road, Ilkley on Friday 22nd April.

Our thanks go to the brilliant Pat's Party committee members who made it happen, the as-ever fantastic Go Your Own Way and everyone who supported the event on the night.

A representative of the UK Ukrainian Society, Bradford Branch attended and explained powerfully the situation in Ukraine and how valuable your help is to his fellow country women and men.

We'll post the final takings when we have collated all the figures. 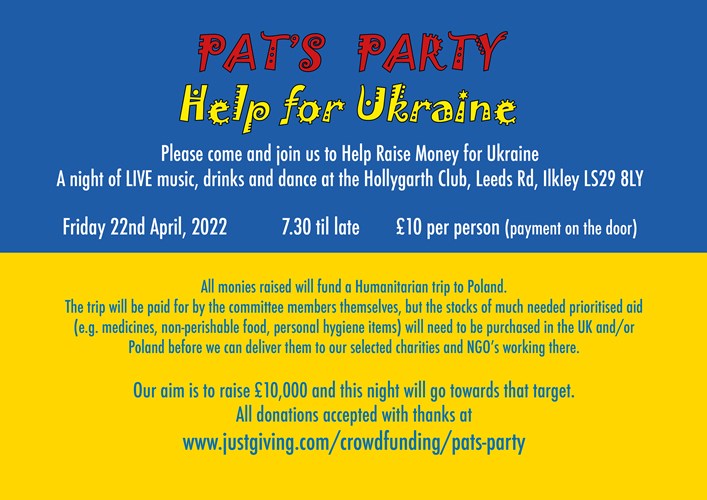 We held an auction with some amazing prizes including a stay in a 4 star holiday cottage, a personal Indian meal cooked for you and three others, a Westrow Hair Salon voucher, and a personal portrait drawing by a local artist. The winners have been advised and we thanks everyone for their generosity.

Pat's Party started in 2004 to raise funds for Save The Children. We organise a summer musical party & a bonfire yearly (except 2021/2 due to Covid). £108k has been raised so far for Save the Children mainly, and also the local Scouts & £5k was donated to build a school classroom in The Gambia

Pat's Party started in 2004 to raise funds for Save The Children We organise a summer musical party & a bonfire yearly (except 2021/2 due to Covid) £108k has been raised so far for Save the Children mainly, and also the local Scouts & £5k was donated to build a school in Gambia