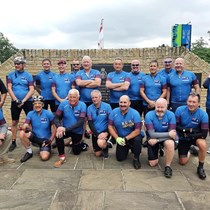 Falklands Forty is a week-long veteran bike ride scheduled to take place in 2022 to mark 40 years since the Falklands War.

As a group we hope to riase funds to firstly ensure the event is a success and donate a large portion to libert Lodge in the Falklands. Liberty Lodge is now firmly established in Stanley, the capital of the Falkland Islands, at a cost of £350,000. The accommodation is for Veterans of the Falklands War of 1982 and their families, NoK of those killed in action and present day service personnel who are serving in the South Atlantic.

June 2022 mark the forty anniversary of the war in which 255 British Service Personnel and three islanders were killed, and many hundreds more were physically or mentally injured.

What is Falklands Forty?

One veteran of the Falklands War, Gus Hales, is on a mission to raise awareness of the three core attributes he believes were critical to Britain winning the war: endeavour, endurance and comradeship. He also wants to reignite awareness of the war and its lasting impact in the British consciousness.

Gus has brought together a group of like-minded veterans who share a love of cycling, and to mark the forty-year anniversary of the war and pay homage to those who fought in it, they are going to complete a landmark bike ride in June 2022 – this is Falklands Forty.

In partnership with Gus and his team, we’re announcing the ride today – so that anyone and everyone who wants to take part, (whether in person on a bike, or in spirit by raising a cheer) – can begin their preparations.

Why have you decided to mark the forty-year anniversary, and do so with a bike ride?

40 years on and thankfully we still have many veterans, some of whom are fit and some whom are in poor health. We want to ride to promote the idea that you don’t have to become housebound as you get older – but I am tempered with the mindset that in 10 years’ time, to mark the fifty-year anniversary we may not have the capacity where we can all do something as a group.

I cycle every day and I enjoy it and I want to get other people involved – not just veterans like me. We’re announcing the ride today, so anyone who wants to ride has a year to train.

Each of us who is committed to the ride already has our own personal reasons for doing it, and we’ll share stories from some of the group over the next 12 months on our Facebook page and here on Safe Lane’s website.

But for me, my thing is I came away from the Falklands like many others with lots of unanswered questions. And this is what war tends to do to you. You ask yourself: ‘if we’d gone this way perhaps that wouldn’t have happened. If we’d gone that way maybe that guy would still be alive.’ These kinds of unanswered questions will slowly drive you mad because they are questions that you literally can’t answer.

This fight in your mind is common to many veterans, and it’s a fight that led me to a Buddhist Monastery where I met a monk called Ajahn Sumedho. He said to me ‘you have a tremendous about of mental energy and a tremendous amount of physical energy. But both of them are destroying you.’

He helped me grasp that I didn’t have to find answers to all these questions, I could let them be. Well, that was the mental energy being dispersed. But that left me still with a tremendous amount of physical energy, and the only real way as I’ve got older to disperse that is just to smash the bike.

Cycling keeps you in the moment; you’re looking at the road ahead, you’re listening for traffic behind you, you’re gauging what speed you’re doing and the amount of effort you’re putting in. Gradually, the post-war angst that you’re left with starts to dissipate through this act of being in the moment on the bike.

So, that’s my underlying personal reason for doing the ride – but the group meaning that we will carry across the country relates to the three core attributes that won us the war. We want to remind people about what it took to win, namely endeavour, endurance and comradeship.

Can you explain more about the three themes behind the ride?

There was a real sense of exploration when we left the UK to head south, we didn’t really know where we were going and what we would be faced with when we got there. What we did know is that we were going to recover the Islands, failure wasn’t an option. We were pushing into the unknown – hence the theme ‘endeavour.’

Finally, we all knew that the only way we were going to be able to get through was if we worked together 100%, that’s ‘comradeship.’

What route will Falklands Forty take?

Well, we’ve agreed the route, but the timings are subject to change as we hope more opportunities to celebrate and commemorate on the ride manifest themselves after today’s launch announcement.

The grand depart is in Cardiff on the 5th of June 2022, we will start by the Falklands Memorial then follow the Taff Trail to Merthyr.

We’ve invited the local Royal Artillery Battery Approach TA to come along and perhaps fire a gun – it’s the Sunday before D Day so we’re hoping for lots of support. Perhaps a Welsh Male Voice Choir will sing, and maybe if Geraint Thomas isn’t working, he might like to join this leg and help get the Falklands War back into the consciousness of the public.

From Merthyr we head up over the Beacons to Brecon where we hope to meet with the Gurkhas and visit the peace garden where there is a Falklands memorial.

Monday is D Day, and perhaps Brecon and Radnor MP Kay Jones will wave us off as we head along the Golden Valley to Hereford where we will respectfully visit St. Martins graveyard. One of our riders is ex .22 so he is going to get the standards out.

Down the road is RAF Cosford, we know the Camp Commandant there so we’re hoping they may get the standards out. This will also be the 8th of June and the anniversary of when the Sir Galahad got hit.

We’d like to have representation from the Welsh Guards if possible, and hope to hold a short service inside the velodrome to remember our fallen comrades.

After that we’ll visit the Falkland Islands Memorial at the National Memorial Arboretum before cycling to Meriden where there is the National Cyclists Memorial which is dedicated to all cyclist troops killed in wars.

On this day we will pause at the 255-mile mark of our ride to remember the 255 British service personnel killed in the war.

Next, we visit the Falkland Islands Chapel at Pangbourne where Reverend David Cooper, who was very prominent in the war, will lead a short service to bless us on our way for the final leg into Aldershot, and to the statue of The Airborne Soldier.

Why have you teamed up with Safe Lane Global?

Last year, Safe Lane completed the epic challenge of clearing the Falkland Islands of the thousands of landmines laid during the war. The company spent 11 long years committed to the painstaking task and were warmly welcomed by the islanders.

SafeLane has a lot of ex-services personnel and very obvious connections to the Falkland Islands – and it’s home to a couple of keen cyclists too! Therefore, we sought their support and were hugely grateful when they agree to not only cheer us on.

We’re also hopeful CEO Adam Ainsworth will join us on a leg or two, and any other Safe Lane personnel will be welcome as well.

We will share updates on the planning for the ride and details of how you can get involved on this page and on our social networks – keep checking back.

On the 5th of June 2022, the Falklands Forty rides will roll out of Cardiff from the Welsh Falklands Memorial to begin their epic journey.

Gus Hales provided this bit of insight into the establishment of the Welsh memorial:

A few years ago when my daughter was small, we walked up Pen-y-Fan to raise funds for the then ‘idea’ of a Welsh memorial;

Some years later we did the walk again, with mum, and as a group of some 100 walkers in total, we finally raised enough money for the memorial.

Today it’s in need of some repairs- let’s hope they are completed before next June for our grand depart!

As planning continues, Gus Hales, Johnny Jinks and Chris Warner travelled to the velodrome to discuss options to cycle 40 laps to mark 40 years…

“Sqn Leader Dave Kerrison is fully behind the event and will be promoting our ride far and wide and providing assistance at the Velodrome – and there might even be a bouncy castle for those who are fed up with the bike!

“An amazing and friendly man, a real pleasure to meet him. The legend who is Chris Warner cycled an 80-mile round trip to be there, and Johnny Jinks travelled down from Halifax. Our initial discussions indicate it’s a Green Light for a cracking day!”