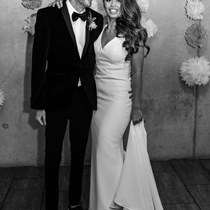 Weʼve raised £30,682 to help get Paul access to the right treatment and Doctors to help save this kind, loving, softest soul.

PLEASE COULD ALL DONATIONS TOWARDS PAULS TREATMENT NOW STOP.

It breaks my heart to have to write this a million more times than my first post.

On Saturday 14th October at 8.20pm the love of my life took his last breath which ended his pain and suffering.

Paul's health deteriorated unexpectedly very quickly soon after I set up the fundraising. He developed further spread of the cancer to his bones but also pneumonia and possibly sepsis.

My husband fought hard to defeat the odds and right up until the end he was still fighting.

However our families believe that he was fighting so hard to be well for our wedding day that following it, he felt he could relax, having accomplished the greatest day of ours and our families lives.

He has left a gigantic hole in both our families lives and I have a hole in my heart. He was the greatest son, brother, husband and future Father there ever was.

Thank you for everyone's support and love, but sadly this time, cancer won.

*please feel free to ready our story below as to the reason behind the fundraising in the first place. This page will close in November as it is the soonest that it can be done*

I was woken by Paul during the early hours of Saturday 18th March, with cries of excruciating pain in his right side and shortness of breath. I called an ambulance, he was reviewed with no concerns and told to monitor. Paul being Paul, woke up the following morning still in pain but continued to go to work as he didn't want to let his colleagues down even though he was doubled up in pain.

He only managed a few hours at work and came home pale and still in unbearable pain. I decided that I would take him to the hospital to the out of hours GP. He was reviewed and told that he had Gall Stones in his Liver which needed removing... If only.

It was only 24 hours later that we went from preparing for emergency surgery to having the walls close in on us and being told the C WORD.

I was standing beside Paul gripping his hand when the consultant came into the Bay, drew the curtains and told us that at aged 35 years old Paul's scans were showing signs of cancer in his liver. Paul at this point did not have a clue what the doctors were trying to say and was in utter disbelief..

We were told to go home and come back the following day for more information. We returned first thing and were made to wait until gone midday to be seen. I have never been wishing to hear the words 'we got it wrong' so much in my life. But that never happened.. we got 'Cancer in your Liver and possibly Lungs.. Incurable.'

How could that be? Paul was only 35, was showing no other symptoms of any issues prior to the weekends.

We left the hospital, numb and not knowing what to do or where to go. Instantly you feel like you are dragging a great Grandfather clock behind you. We went to our local pub at 2 in the afternoon, cried together and Paul asked me to Marry him.

I of course, undoubtedly said YES! We had been waiting and had put our life on hold whilst I followed my dream to become a Midwife and had to complete my 3 year degree course and training. And so, the house, the wedding and children were all sensibly at the time put on hold for me to follow my passion.

Paul's  full  diagnosis  is 'Colangiocarcinoma Cancer of Unknown Primary , with Liver  Metastases'.  In normal peoples language it means wherever Paul's cancer begun it cannot be found but has spread to his Liver in such a vast amount it is inoperable and non-curable.

This is extremely rare for people of this day and age to still have cancers whereby the Primary source cannot be found, in addition to Pauls age. It also makes treating it very difficult and a bit of pie in the sky!

We gained, 2nd, 3rd, 4th opinions trying to find someone who could maybe give us some positivity and hope. This never came. Our only option was standard Pallative Chemotherapy with a hope to slow or stop the growth of the cancer.

June was a difficult month whereby Paul spent most of it in hospital. He first developed blood clots in both lungs which could be critical if travelled to his heart.. After being discharged from hosptial we were readmitted with pneumonia and larger clots in his lungs.

On July 31st we went for our scan to see if the chemo has worked. It hadn't. Not even so much as stopped it growing.

We commenced 2nd Line treatment, to as our consultant said 'try a different flavour!' Flavour!! More like toxins to poison him some more.

And poison him it did. He was hospitalised for a week and we have been told to try a different kind again and this is the last resort.

After that we decided to get married as neither of us wanted to do it whilst he was unwell and could not stand at the alter and enjoy our wedding day. So on September 10th we did and what a magical day it was.

3 days after our wedding we recommenced chemo and have only managed to make 1 treatment and his health has taken a turn for the worse. He has not been able to have his 2nd treatment due to poor health and bloods. He is no longer recovering like he had before and his body and mind has been taken over.

There is nothing left for us within the NHS. Paul needs more specific and specialised treatment. Sadly his cancer is so rare that it makes treating it that tad different from others. If we could find the primary source it would give us a better chance at fighting it with the correct stuff, so more genetic tests need to be done that are again not offered by NHS.

Immunotherapy is one possible new treatment for cancer and is offered through some clinical trials or private. It works by encouraging the immune system to fight rather than chemotherapy helping the body kill itself.

But like most ground breaking it comes at an extreme cost. Our families will be doing a number of wild and crazy fundraising events which more details are to follow. The cost is beyond the £30,000 I have set but it seemed like a realistic starting point.

But for now, I felt that now is the time that I ask for friends, family and anyone who reads this to help if they can. I am 26 and Paul is 35 and we would very much like to at least be given a better chance at starting that life together that we put on hold for far too many years.

And for anyone who may think about the other options, we have Paul on a clean diet, no sugar, no diary and lots of supplements and herbs but he is now tackling sickness, fatigued ,a blocked bowel and abdominal ascites (that's swelling to you and me), constant nose bleeds, anxiety, extreme weight loss which has meant his spine and coccyx is all he can lay on. We are up against it but I will not loose my husband to this nasty thing that is consuming so many innocent lives and now so young.

Thank you for reading. I will update regularly with Pauls progress and for now I ask that you all pray that we get some good news this side of Christmas!

4th October 2017.. another day that will go down in the memory box and one that brings back all the feelings from 19th March and 31st July. Pauls condition in the liver has progressed but has now also spread to his bones. The fight just got a little harder and theres still time for good news before christmas!

Could I also kindly ask that no one contact Paul directly and please send all your well wished either on this page or to me. Love and support is so needed right now but with the anxiety he is feeling it may be overwhelming. Thank you all so much!

Young wife to an amazing man who haven't been so lucky in life and not even given a chance to live together, let alone have a family. Met in 2011 & married in September 2017 as cancer wasn't going to take that away from us. Please read and support my husband and his fight!