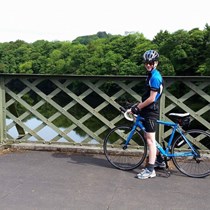 Three years ago, I joined the North West Area PT branch as a timid teenager, as I enjoyed sport and physical activities. I wanted to earn the badge, I wanted to attend the training sessions and become a first class PT cadet.

It took a while, but eventually I understood that to become part of such a team, there would be no 'I' but a 'we'. You have to be prepared to spend long days practising half mile runs, organising recreational training games and physical training circuits. That's before spending the evenings getting everyone's white uniforms washed and pressed and supporting others when the morale is low and they want to quit.

I was really proud to become a PT instructor at 13. It gave me the confidence to aim higher, achieve more and push my boundaries. I wanted to give back as well so last year, with my mum and friends, we completed the Coast to Coast, over 3 days and entered 2 triathlons, to raise money to buy new clubs for the display team.

This year, I will be taking part in the Manchester to Blackpool bike ride first, then a triathlon and a half marathon later on in the year, to raise money to buy the team new tracksuits and display kits. It would be great if we could reach the target and any help received towards it would be greatly appreciated.