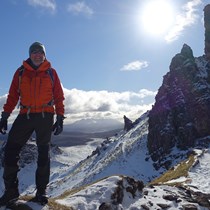 I’m raising money for a great Scottish charity that looks after kids with life limiting illnesses. The charity is still recovering from a devastating flood in 2020.

Jan and John Bryden set up the Kirsty Bryden Memorial Trust after their daughter was tragically killed in 2010 just before she was due to take on a fund-raising 125cc motorbike ride around the UK to raise money for “Over the Wall” a charity that she supported. Kirsty had devoted her life to nursing sick, dying children, children with special needs & their siblings. Jan and John set up Kirsty’s Kids to continue Kirsty’s work with a focus on helping to improve the lives of all children including those who are suffering from serious life limiting illnesses, children with special needs and their siblings.

They do this by providing accommodation for these children and their families in the peace and tranquillity of the Scottish Highlands. All expenses including travel, food and all living costs are provided by the charity. Their grounds have been transformed with a large model railway, craft room, wood craft studio for families, hydro care facilities and a sound and sight sensory room. Much of Jan and John’s time during ‘respite’ stays is spent getting kids involved in projects. The facilities that Jan and John have built over the years are used by the kids with John’s guidance to help them design and build all manner of things which creates self-worth and helps them build self-confidence.

In June 2020 a devastating flood caused by heavy rain piling up behind ditches which had blocked due to lack of maintenance by a third party suddenly cleared and sent a tsunami of water washing away part of the railway line between Fort William and Mallaig pushing the debris of mud and rocks through Kirsty’s Kids property creating total devastation. Everything that Jan and John had worked so hard for was destroyed by mud, rocks, and water in minutes. By sheer hard work, and volunteers putting in thousands of hours of work, Kirsty’s Kids is nearly back where it was before the flood. However, there is still a need to provide the equipment that the kids use. To get Kirsty’s Kids back to its full potential again, we need to raise at least £5,000, which will be used to replace these specialist pieces of equipment used by the kids.

We have been running our Guest House in Fort William for 5 years and have always collected money for Kirsty’s Kids. However, as retirement age approaches, we will soon be saying goodbye to our business. So, I decided to make one last effort to help them over this hurdle. I will be walking across Scotland west coast to east coast, wild camping, between 15th and 27th May this year. I ask you please, to donate via the link to help us get to this total of £5,000 and finally get Kirsty’s Kids running at full potential to provide support to these kids with life limiting illnesses and their families.