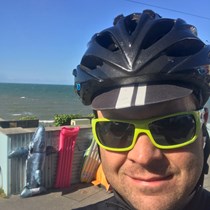 Weʼve raised £3,331 to ride the Paris-Brest-Paris to raise money for Maggie's Centre Cambridge and Cancer Research UK in memory of Sam.

In August 2018 I lost an old school friend, Sam, to cancer. He was 36, two weeks younger than myself, and had a young family, just as I have. Losing a friend like this, at such a young age and in a situation very similar to my own, affected me in a way I wasn't expecting.

Inspired by Sam’s, and his wife Xanthe’s, unrelenting positivity and faith in the face of such a terrible situation, I felt I had to try and pay tribute to such a fantastic couple.

I wanted to do something I could dedicate to Sam's memory and look back on with pride. Something of which he would be proud. Losing a friend like this certainly focuses the mind to get out and do things, to have different experiences and to make the most of the opportunities you have.

So, in August 2019, I will embark on the Paris-Brest-Paris Randonneur. This is one of the oldest cycling events in the world and requires riders to cycle from Paris to Brest and back again, a distance of 1218km. I will have 84 hours to complete this in.

Just getting to the start line itself requires a feat of physical endeavour. In August 2018, only a few days before Sam passed, I completed a 300km ride as a pre-registration qualifier. Before I can confirm my entry, I also need to complete a "super-randonneur" series, doing a 200km, 300km, 400km and 600km ride.

My fundraising target will be the total number of kms I will cover across all the events, which is 3018km = £3018. The money donated will be split equally between two charities. The first is Maggie's Centre in Cambridge. This charity provided a great deal of support for Sam and his family during his illness, and continues to support Xanthe and the children. The second is Cancer Research UK, to try and help others affected by cancer with treatments and cures.