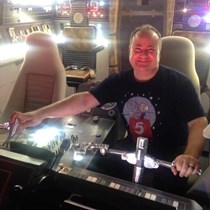 Weʼve raised £5,905 to help wonderful man Pinball Geoff, who has been out of work due to an assault injury, pay for a badly needed new heating/water system.

Pinball Geoff is a wonderful human being.
If you're reading this, the chances are you already know how nice he is. He's probably been kind to you personally.
Not long ago, the Bikini Beach Band were physically attacked whilst unloading for a gig by drunken yobbos, and Geoff suffered an injury as a result.
Since then, although he's recovering well, it's been difficult for him to earn a living as he's been unable to drive, drum, or lift Pinball Machines above his head in the usual fashion.
Now, a (mini) disaster has struck; a burst radiator has caused mayhem for Geoff and his neighbours below him. He may well need his whole heating system replaced but as he's not earning he can't afford to do this at present, so is living without hot water!
Geoff spends a good deal of his life helping others; some friends, some strangers, and all voluntary.
I think it's time someone helped him back.
Please give what you can, it will all add up.
I've no idea how much a new system will cost, but I've started the target at £3000
Thank you! .