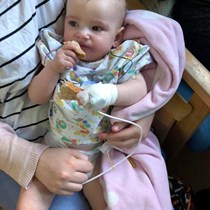 We would like to raise money for the Retinoblastoma team at Birmingham childrens hospital who are helping our daugther Piper.

Piper aged 10 months was diagnosed with a Rare cancer called Retinoblastoma in December last year. We went to see an optician after noticing Piper had developed a lazy eye, and what we thought was an everyday problem with children quickly escalated into something much worse.

After being inspected at Birmingham Children's Hospital Piper was diagnosed with Cancer. Her eyesight deteriorated over the next few days as we waiting for chemotherapy to arrive for Piper. It shook our family completely as this was such a shock to us, however we were determined to fight for Piper and little Piper was too.

Pipers battle began with Chemotherapy treatment at Birminghams children's hospital which was quickly followed daily visits to the hospital as the treatment took effect on Pipers body.

We were told shortly after that Piper had lost most of her eyesight and that she would lose complete use of one of her eyes.

The next few weeks Piper was very sick and rarely ate but she kept a smile on her face.

Almost daily trips to the hospital were needed it became the families routine.

But none of us gave up on Piper...

After 3 months of battling cancer, Piper was given the all clear by Birmingham children's hospital. She is now resting at home after her exhausting treatment and is as happy as ever. Her eyesight is still not perfect however her battle against cancer has been won.

We are now pleading to YOU to help us raise money for the Retinoblastoma team at Birminghams children's hospital. The team that stopped Piper from losing her eye sight completely and gave Piper a fighting chance against Cancer.

The team need this money to continue to offer the services they offered Piper to other young children who suffer from Retinoblastoma. With your help more children stand a chance.

Thank you for reading,

Please donate what you can.