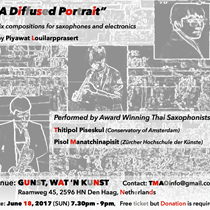 In the past few years, I have curated several new music events, including concerts, workshops, and masterclasses for young musicians in Thailand, and also concerts in Europe. Last year, we established the Thailand Music and Arts Organisation (TMAO) -- its aim is to create and promote contemporary music and art internationally. It also supports Thai musicians and young artists, enabling them to collaborate with international artists and take part in music festivals.

Past events include the TMAO Music Day: Saxophone and Composition Workshop 2017 at College of Music Mahidol University, Thailand, and also public concerts in the Royal Academy of Music and Saint Mary-at-Hill Church, both in London, from March - April 2017. We received plenty of positive feedback for these concerts. The audiences were particularly intrigued by non-traditional sounds made by the saxophones, used in innovative ways by different composers, which altered the way they thought of and listened to music. The creative use of electronics in the music performed also sparked an interest in the way music can be altered digitally -- being able to see the performer control the electronic devices live also enhanced this experience.

This June, we are curating a concert titled ‘A Diffused Portrait’. It is a collaboration between award-winning Thai performers, and composer, Mr. Pisol Manachinapisit (from Zürcher Hochschule der Künste), Mr. Thitipol Piseskul (from Amsterdam Conservatory) and myself. The first concert will be held on 18 June 2017 at GUNST, WAT ’N KUNST, Raamweg 45, 2596 HN Den Haag, Netherlands, and the second concert will be at St. Cyprian Clarence Gate Church, London

Currently, we need aid with regard to our budget for flights and accommodation expenses, as well as venue fees and advertisements for the concerts. More projects are also being planned for the next few years. Your help would be greatly appreciated in our mission to share the uniqueness of Thai new music and musicians!

I am currently pursuing Music Composition at the Royal College of Music, London. My country of origin, Thailand, has a unique culture and musical language, and sharing this rich heritage through music is one of my goals as a composer. site: http://piyawatmusic.weebly.com